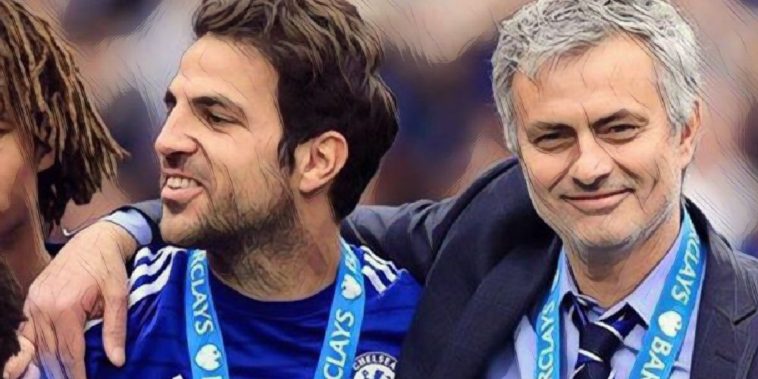 Cesc Fabregas has opened up on his career and has compared his relationships with former managers Jose Mourinho and Pep Guardiola.

Fabregas is amongst the select group of players to have played under the iconic managerial duo, with Mourinho and Guardiola amongst the most successful coaches of all-time, winning four Champions League trophies and 16 league titles across five different countries between them.

The two managers will face each other once more this weekend when Manchester City travel to face Tottenham in the Premier League, in the latest intriguing clash between two of football’s greatest tacticians.

Fabregas first played under Guardiola during a single season at Barcelona before the latter’s departure from the Camp Nou, and has opened up on a difficult period in Catalonia.

The midfielder won a league title and Copa del Rey amongst his honours during a three-year spell at his boyhood side, though he largely struggled to command an automatic place despite an impressive goal and assist record amid competition from the likes of Xavi and Andres Iniesta.

“I was a little out of tune with the club at the end,” he told Catalunya Radio’s Tot Costa programme. “I started the first year very well and then I think I had a very good year in the second, with Tito [Villanova].

“But football has no memory. My feelings are that that period with Barca, seen from my perspective now, was much better than it seemed when I left the club.”

Fabregas’ frustrations at his Barcelona reunion led to his departure from the Spanish side in 2014, returning to the Premier League after signing for Chelsea for a fee in the region of £30m.

The midfielder played an influential role in his debut season as Jose Mourinho guided the west London side to a Premier League and League Cup double, and says he retains a strong relationship with a coach who helped him enjoy his football once again.

“I have always liked to be valued and esteemed by the clubs [I play for], and when I saw that I no longer was at Barca, I saw that there were coaches in Europe who valued me more.

“My first season at Chelsea, when we won the double, helped me a lot. He was the one who inspired me the most when I left Barca. He told me that we had [differences] on the field, but that it ended there.

“He told me about his project and I prioritised the professional. Today I continue to write with him and I consider him a friend. He helped me a lot at the time.”

Fabregas revealed that his close bond with Mourinho is in stark contrast to his relationship with former Barcelona coach Guardiola, insisting he has huge respect for his childhood ‘idol’ but admitting ‘there are things that happened’ that mean their relationship is ‘nothing’ more than professional.

“With Pep, nothing,” he said. “There are things that happened that I don’t want to talk about.”

“He was my idol in my childhood and perhaps is the person from whom I’ve learned the most – as a player, an idol and a coach. That’s it.”

Read – Legends: Five players to win the Golden Boot and finish with the most assists in a PL season