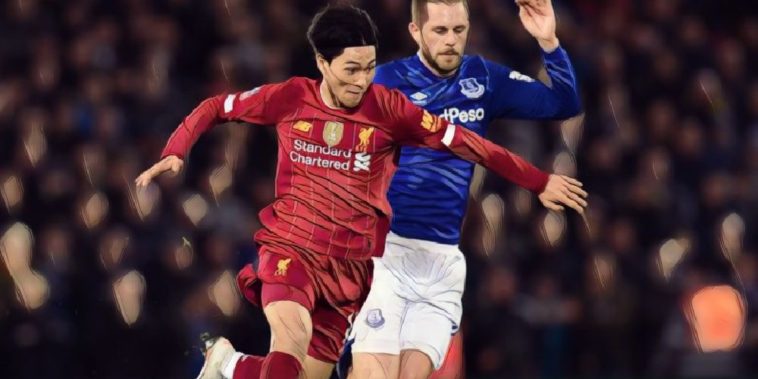 Jurgen Klopp has praised the performance of Takumi Minamino following the midfielder’s debut for Liverpool in their FA Cup third round victory over Everton on Sunday.

Teenager Curtis Jones would take the headlines as the 18-year-old scored a stunning goal to seal a 1-0 victory, though fans were also excited to get their first glimpses of the club’s latest signing.

Minamino was named in the Liverpool side for the first time since completing his move from RB Salzburg, the Japanese international given a baptism of fire, making his debut in the intensity of a Merseyside derby clash at Anfield.

The 24-year-old operated in an unorthodox role as a central forward and showed glimpses of the talent that persuaded the Reds to beat off competition from across Europe to secure his cut-price signature, Klopp praising his performance in a much-changed team as he begins his adaptation to the demands of English football.

“In your first game for a team you don’t know, it’s not a settled team, it’s already difficult.”

The Liverpool boss opted to make a host of changes to his side for the clash, with only Joe Gomez and James Milner retaining their places from the midweek win over Sheffield United, the latter picking up an injury in the opening minutes and being replaced by youngster Yasser Larouci.

Teenagers Neco Williams, Curtis Jones and Harvey Elliott were all handed starts, and Klopp was pleased with how Minamino adapted to a heavily rotated side having only arrived for his first training sessions during the past week.

“This team we threw together on the pitch with basically two sessions together, to show this sort of understanding, his football skills were exceptional and his attitude was outstanding,’ he added.

“He led the chasing pack so often. He didn’t look tired, but we don’t know the player that well yet so we took him off.”

Read – FA Cup Third Round: Team of the Week