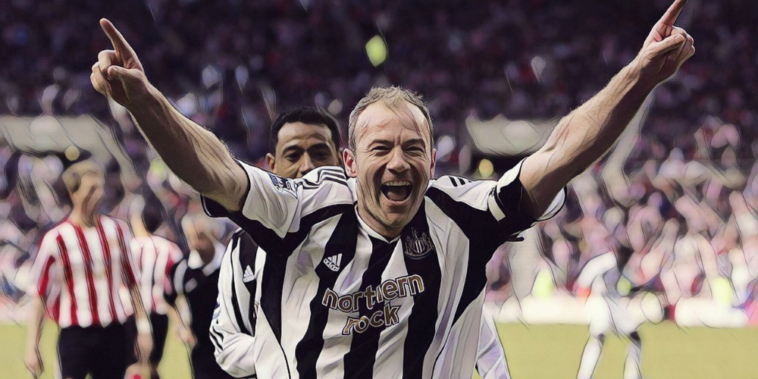 Newcastle’s number nine shirt is the club’s most hallowed, with few fans appreciating a goalscorer quite like the Magpies.

Callum Wilson is the latest player to have been handed the iconic shirt and the forward will hope to follow in the footsteps of some of the Newcastle players to have worn a shirt with significance.

Wearing the nine carries expectations from the often bare-chested support who will their side on from the St James’ Park terraces, though not every incumbent as proven a success story.

Here are our ratings of every Newcastle number nine of the Premier League era.

Andy Cole exploded onto the Premier League scene during the division’s second ever season, having helped fire Newcastle to second tier promotion during the 1992/93 campaign.

Cole stepped up seamlessly as Kevin Keegan’s side finished third on their Premier League return, winning the division’s Golden Boot and the PFA Young Player of the Year award after scoring a record 34 goals for the Magpies.

Forming a fine partnership with Peter Beardsley, Cole scored 43 goals in just 58 appearances for the Magpies in the Premier League, before leaving for title rivals Manchester United in a shock British transfer record deal.

Cole’s replacement was Queens Park Rangers forward Les Ferdinand, who had scored 60 goals across three Premier League seasons with the west Londoners before a £6m move to St James’ Park.

His impact was instant as Ferdinand scored 29 goals in all competitions during his debut campaign, being named as the PFA Player of the Year after firing Newcastle to a runners-up finish.

The arrival of Alan Shearer the following summer saw Ferdinand hand over the number nine to the world record addition, despite a prolific record 41 league goals in 68 appearances across two seasons at Newcastle.

He was surprisingly allowed to leave for Tottenham in 1997, after Newcastle’s entertaining side of the mid-nineties fell just short of Premier League success once again.

Alan Shearer sealed a £15m world record transfer to boyhood side Newcastle in 1996, as thousands turned up to greet the arrival of the Geordie goal-getter.

Shearer had scored 112 league goals in just 138 appearances for Blackburn and won two Premier League Golden Boots before signing for Newcastle, winning a third accolade as the division’s leading scorer during his first season with the Magpies.

Shearer was named as the PFA Player of the Year for a second time during that first season at Newcastle and the goals continued to flow during a decade of service.

He scored a record-breaking 206 goals in all competitions for Newcastle to eclipse Jackie Milburn’s 49-year record, whilst he hung up his boots as the Premier League’s record scorer with 260 goals.

Obafembi Martins had the unenviable task of replacing Shearer as Newcastle’s number nine, with the Nigerian international signing from Inter Milan.

Martins scored 17 goals in all competitions for the Magpies during his debut season and spent three campaigns with the club, with the forward possessing blistering pace and powerful shooting off either foot.

He scored 35 goals in 104 appearances for Newcastle before joining Wolfsburg following relegation, and is quirkily one of just two players – alongside Bobby Zamora – to have scored Premier League penalties with both feet.

Andy Carroll inherited the number nine following his rise through the club’s academy ranks, the home-grown hero playing a prominent role in the Magpies’ promotion from the Championship in 2009/10.

Carroll then enjoyed a brilliant start to the Premier League season with 11 goals – including a hat-trick against Aston Villa – in just 19 appearances, performances which persuaded Liverpool to splash a club record £35m on his services during the January transfer window.

Injuries have prevented Carroll ever reaching the heights once expected and he rejoined Newcastle in 2019, though scored just once in 43 appearances before his release this summer.

Few players have ever had as instant an impact in the Premier League, with Papiss Cisse announcing himself as an immediate fan favourite following a spectacular start to his Newcastle career.

Cisse signed mid-way through the 2011/12 season and scored a staggering 13 goals in just 14 appearances, helping to fire Alan Pardew’s side to fifth-place and Europa League qualification.

The Senegalese striker memorably scored a stunning double in a 2-0 win at Chelsea and formed a potent partnership with compatriot Demba Ba, though the goals failed to flow as freely during a turbulent period for the club in the following seasons.

He scored 44 goals in 131 appearances for Newcastle before moving to China with Shandong Luneng.

Dwight Gayle first sported the Newcastle number nine following his arrival from Crystal Palace, scoring 23 league goals to fire the Magpies to promotion from the Championship in 2016/17.

Despite a prolific record in the second tier, he has largely failed to replicate those performances in the Premier League and has scored 11 goals across three top tier campaigns at St James’ Park.

Loaned to West Brom during the 2018/19 season, he remains a Newcastle player but now wears number 34 in Steve Bruce’s squad, a reflection of his often bit-part role.

Gayle’s aforementioned loan move to West Brom saw Salomon Rondon head in the opposite direction in a similar arrangement, with the Venezuelan proving a popular figure during his temporary spell at St James’ Park.

Rondon scored 11 goals and provided seven assists during a productive 2018/19 season, leading the line in fine fashion and working well in tandem with Ayoze Perez.

He was named as Newcastle’s Player of the Year – the first forward to win the accolade since Alan Shearer in 2003 – but a permanent deal could not be agreed as the star eventually joined former Newcastle boss Rafael Benitez at Dalian Professional.

Newcastle fans have often bemoaned a lack of investment in recent seasons, though the club’s controversial ownership splashed out a record £40m to sign Joelinton from Hoffeinheim in 2019.

The Brazilian had impressed during his time in the Bundesliga, but has struggled to make an impact in the Premier League with his record-breaking price-tag and the weight of the number nine proving a burden.

A nightmare debut season saw him score just two league goals, whilst a tally of four last term was a modest level of improvement for the struggling star.

Callum Wilson has jumped at the chance to take the number nine from Joelinton ahead of the 2021/22 season, having enjoyed an impressive first season at Newcastle last term.

Wilson opened his account for the new campaign with a goal in the defeat to West Ham on Sunday and will be hoping to maintain that form, as he bids to regain his place in the England squad and enhance the legacy of Newcastle’s number nine shirt.