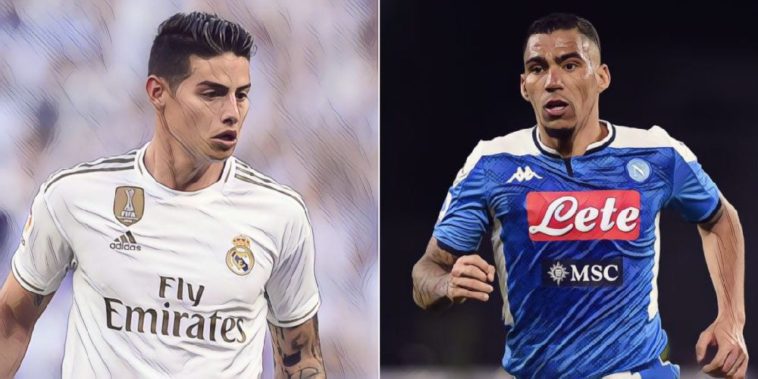 Everton are edging closer to kick-starting Carlo Ancelotti’s rebuild with moves for midfield duo James Rodriguez and Allan having taken a step closer.

Much was anticipated of Everton following the appointment of the three-time Champions League winner back in December, and despite an initial upturn in form, they ended the campaign in miserable form, winning just three of their 10 post-lockdown fixtures to finish 12th.

Their struggles have drawn plenty of criticisms from the Goodison Park faithful, particularly of the club’s midfield department, and it seems like Ancelotti has also identified the middle of the park as a particular point of weakness in his side, the Italian turning to two players who he has already worked with to bolster his team.

The Merseyside outfit have agreed a £25 million deal for Napoli’s combative midfielder dynamo, Allan, Ancelotti having worked with the 29-year-old during his time in charge at the San Paolo stadium.

Now, according to talkSPORT, Real Madrid playmaker James Rodriguez is set to fly in for a medical ahead of a season-long loan deal on Merseyside, the Colombia international looking to kick start his career after seeing his stock drastically fall in recent years.

Rodriguez earned himself a £63 million move to Ancelotti’s Real Madrid following his impressive displays at the 2014 World Cup, making an instant impression at the Bernabeu, before becoming a peripheral figure under Zinedine Zidane.

Ancelotti then re-signed the playmaker on loan during his time in charge at Bayern Munich in 2017, and the pair now look set to be reunited for a third time as the Toffees finally look to make headway on their ambitious plan to return to European football.

Blues fans will be hoping that Allan’s arrival will help shore up a defence that conceded 56 goals last season, while also hoping Rodriguez can supply more goalscoring opportunities, Ancelotti’s side finding the net just on 44 occasions.