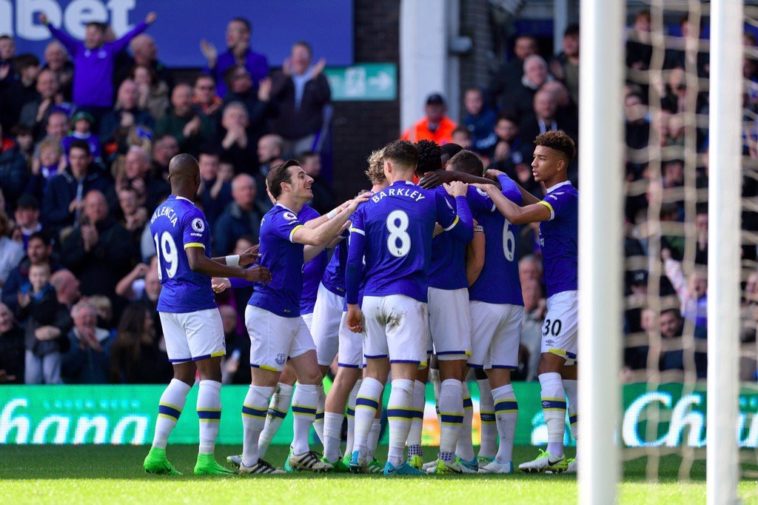 Burnley slumped to yet another away defeat at the hands of Everton, although the 3-1 score-line probably flattered the hosts.

Goals from Phil Jagielka, Romelu Lukaku and a Ben Mee own goal were enough to see the Toffees secure their eighth successive home win.

Sam Vokes netted for the Clarets to make the game 1-1, but Burnley couldn’t hold on to claim a crucial point on the road.

Sean Dyche’s side made a tentative start, and they nearly gifted Everton a goal inside five minutes. Good work down the right from Ross Barkley gave Mason Holgate a crossing opportunity, and his cut back found Lukaku 12 yards from goal. The Belgian’s right footed effort was straight at Heaton.

Michael Keane came very close to opening the scoring when he directed Robbie Brady’s corner back across the goal. Everton goalkeeper Joel Robles was helpless, but Barkley covered behind the keeper to head off the line.

Everton looked a side under pressure in the first half, and that almost told when a Joey Barton through ball put Sam Vokes through on goal, but his tame effort was saved by Robles.

Vokes was gifted yet another chance moments later. A slack back pass from Phil Jagielka fell to him with only the keeper to beat. He took the effort on first time, but again, his effort was weak and straight at the keeper.

Holgate then went close for the hosts. A loose ball broke to him in the box, and his low right footed effort forced a smart save from Heaton, who pushed the ball to safety.

Kevin Mirallas nearly sent Everton in with a half time lead, when his free-kick deflected off the end of the wall, leaving Heaton rooted to the spot, but luckily for Burnley, it drifted just over the bar.

Goal line technology to the rescue

It took just 3 minutes after the re-start for Everton to stamp their authority on the game, but they did so in rather fortuitous circumstances, not that any Blues fan will care.

A corner swung in from the right bounced around in the Burnley box before Phil Jagielka directed it goal-ward and after Robbie Brady failed to clear it off the line, goal line technology ruled that the ball had crossed the line.

Many would have predicted that would be the end of Burnley, but they would be proved to be wrong just three minutes later.

Great play from the back from Michael Keane allowed Jeff Hendrick to put Sam Vokes through on goal and as he touched it away from the goalkeeper, Robles brought him down. Penalty Burnley.

Vokes dusted himself down and coolly converted the penalty, sending the Everton stopper the wrong way.

Everton continued to pile the pressure on the Burnley goal, and the breakthrough came 20 minutes from time, when the Toffees capitalised on some sloppy Burnley play and Ross Barkley’s effort was deflected into his own net by Ben Mee.

Everton had chances to wrap up the game and end any lingering hopes the Clarets had of getting into the game, but they failed to capitalise, not that it made a difference in the game.

The last chance of the game fell Burnley’s way, when Stephen Ward looped a header over Robles, but that man Ross Barkley was there to clear it off the line, again.

Toffees are tough to beat

Everton will be delighted to set a new record of eight consecutive home wins and the second half performance will definitely have pleased Ronald Koeman. They were slow to get started and never really got out of second gear, but that was enough to brush aside the Clarets. Lukaku continues his assault on the top goal scorers chart. He was quiet for large parts of the game, but delivered when required.

Overall, Sean Dyche won’t be too disheartened with the result and the scoreline probably flattered Everton. Two fortunate goals went the way of the Toffees, but the Clarets seriously need to address their attacking options. Plenty chances were created today, but there was no one capable of taking them, which will worry Dyche. However, on a positive note, the gap to Swansea remains at eight points and another game is ticked off, so overall, not a bad day.