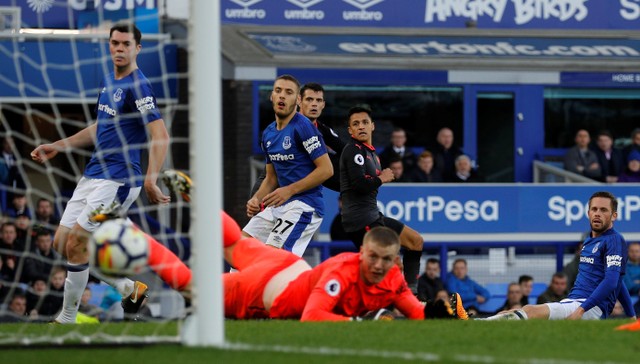 The clock is ticking for Koeman

For many the time is now up for Koeman, this performance was another dire one that that lacked shape and fight.

I am fully aware that in my ‘Five Things We Learned’ Koeman’s future is always the first thing I mention and this will not change until results turn around or he is out of a job, with the latter being the more likely scenario.

Everton’s season is literally falling apart and Koeman doesn’t look like he particularly knows how to fix it. He has tried numerous different formations and players in certain positions and yet the performance and results are always the same.

Everton have had previous poor runs under Koeman in the past like last season when the team only won one in ten. However, this has a different feel to it. During that poor run one of Koeman’s solution was to bring in more youngsters and eventually it payed off. However, watching displays this season it seems Koeman is now all out of ideas on what to do.

There is a strong argument to suggest that Everton may need a boost and some fresh ideas and Koeman doesn’t look like he can offer that anymore. Yesterday’s game was no different, Everton were already awful in the Arsenal game before Gueye was sent off and could have easily been out of the game in the first 20 minutes, disputing the 10 men argument.

Any more performances like yesterday’s one and the clock will stop ticking as time will be up for Koeman and his Everton career.

Everton are now in the relegation zone

Anyone who would have said this at the beginning of the season would have been laughed at but incredibly, Everton after yesterday’s result, are in the bottom three on goal difference.

An Oumar Niasse goal in the 93rd minute offered some light for the blues as it briefly took them out of it, before a Sanchez goal in the 95th minute put the blues straight back in there.

This is the first time in 12 years that Everton have been in the bottom three and the blues based on current form are at risk of being separated from the pack, even at this early stage. As bad as it got under Roberto Martinez’s reign in the final two seasons this is something he never once managed which is extremely worrying when thinking about Everton’s future under Koeman.

For a team that spent around £150 million in the summer this is quite an embarrassing capitulation, especially since the toffees are also bottom of their Europa League group. The money they have spent has now put more emphasis on the position they are in and it has left Koeman with very little excuses.

Koeman will be hoping that a rejuvenated performance against Chelsea mid-week in the cup can turn Everton’s season around and push a way out of the relegation zone. 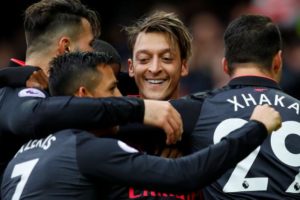 Arsenal’s big guns turned up in a big game

Although this didn’t have the same ring to it like a game against Manchester United it was still a big game for the gunners. Goodison is usually an extremely tough place to come and Arsenal hadn’t won away from home all season meaning they needed the win.

Wenger went with the front three of Ozil, Sanchez and Lacazette. Players such as Ozil have been constantly criticised for their performances in games like this, especially away from home. Sanchez has also been much quitter so far this season.

This game showed just how important Sanchez and Ozil are to this Arsenal team and it will be an extreme worry that they are currently running their contracts down and look certain to leave. Wenger needs to do everything he can to prevent that from happening. 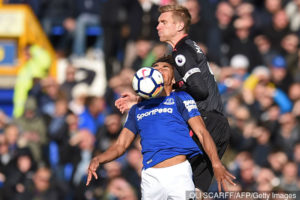 Everton are seriously lacking a centre-forward

Calvert-Lewin looks a fantastic prospect; however, prospect is the key word. He simply isn’t ready to be starting week in week out like he has been. It is the definition of throwing someone in at the deep end, sadly for Everton there isn’t another choice.

Rooney still offers Everton some quality but he is too old now to be the main focal point of an attack and looks a lot more suited playing in a number 10 role. Sandro doesn’t look ready for Premier League football and stinks of a Gerard Deulofeu case where despite his obvious talent he just wasn’t suited to the Premier League.

The game against Arsenal made Everton’s striker crisis re-emerge as it has been pretty apparent all season. So far in the league Rooney has three goals. Calvert-Lewin has none and neither does Sandro.

Stats from the Arsenal game show just how poor Everton actually are at the minute in the attack. In the game Arsenal’s five goals equalled the same amount Everton have scored at Goodison all season. Another worrying stat was that Arsenal had 14 shots on target in that game, just one less then Everton’s league tally at Goodison all season. Koeman needs to find a way to change that and quickly.

Arsenal have finally won their first away game of the season

Considering Arsenal’s ambitions this season, the fact they hadn’t won a league game away from home needed to change, and what a performance to do it in giving Wenger a very satisfying birthday present.

Wenger may have also found the correct formula to help the away wins coming, having Ramsey, Ozil, Sanchez and Lacazette all in the same team for the first time this season meant the gunners played some mesmerising football.

Arsenal had 14 shots on target during the game and if it wasn’t for Everton keeper Jordan Pickford, they could have easily got more than five goals.

Goals from Monreal, Ozil, Lacazette, Ramsey and Sanchez confirmed the Gunners first points on the road in what was a pretty comfortable day for them. Wenger will now be hoping this helps them push on for the rest of the season.