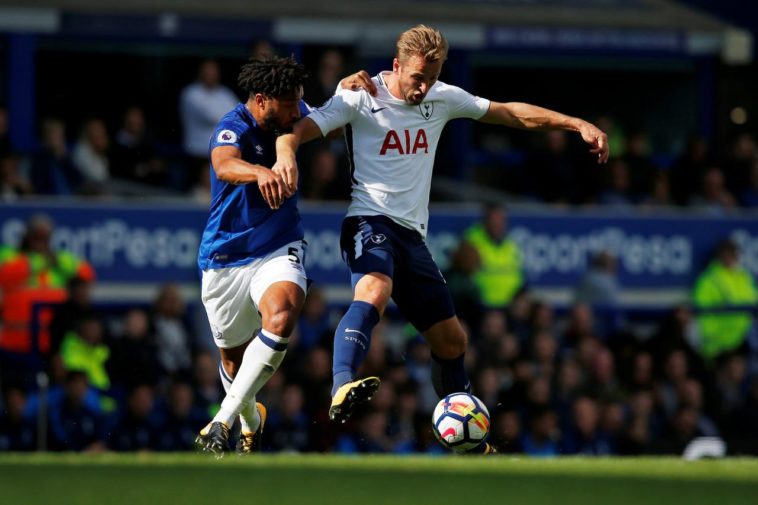 Tottenham bounced back from a dip in form with a comfortable away win against Everton, who lost for a second consecutive game.

A Harry Kane double and an easy goal for Christian Eriksen gave Spurs an easy win at Goodison Park, which really could have been five or six.

Everton had an early chance when Wayne Rooney played Cuco Martina in on the right hand side, but Sandro couldn’t direct Martina’s cross on target.

Not long after, Eriksen had a chance after Dele Alli expertly controlled the ball and laid it off to him, but he mishit his shot and it flew wide.

Moussa Sissoko was next to go close for Spurs, but his shot from close range was blocked by an Everton defender. The ball came back out to Eriksen who sent in a cross, however Kane miscued it and the chance was gone.

In the 28th minute, a Tottenham corner missed everyone in the box but ended up at Harry Kane’s feet to the right of the Everton box. His attempted cross turned shot and looped right over Jordan Pickford’s flailing arms and into the back of the net – Kane’s 100th goal for Tottenham.

Spurs doubled their lead in the 42nd minute. Dele Alli showed great awareness to latch onto Sissoko’s header forward, before sending a cross in the back post. Martina fluffed his attempted clearance, giving Ben Davies the opportunity to fire one towards the back post; Pickford saved this effort well, but palmed the ball into the feet of Eriksen who skilfully dispatched the ball into the back of the net.

Tottenham could easily have had three by half time, as Alli failed to convert Kane’s cross, and the striker then fired a shot wide after a poor defensive header by Martina.

The third came less than a minute into the second half. Davies sent a brilliant low cross into the box, and Harry Kane opened up his body and slotted the ball into the bottom corner for his second of the game.

Eriksen nearly added a second for himself soon after. Harry Kane chipped the ball over the Everton defence and the Dane volleyed it goalward, but his effort was saved well by Pickford.

Kane had a chance for his hat-trick after Alli’s cross deflected into his path, but Pickford was on hand once again to prevent Tottenham extending their advantage.

Tottenham nearly surrendered their clean sheet towards the end of the game. The Spurs defence got a bit overconfident, playing the ball riskily around the back, and Hugo Lloris passed it straight to Idrissa Gueye but the Everton midfielder could do nothing more than send his snapshot wide.