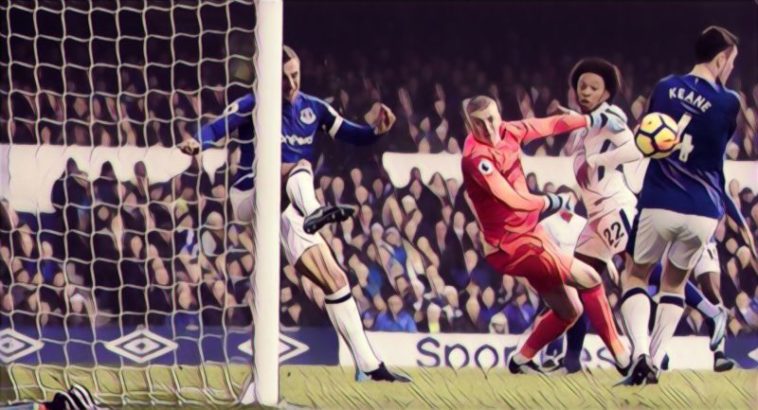 Made a string of decent saves and commanded his area superbly.

Chelsea attacked down his side a lot all game, but the youngster stuck to his task well.

Made a crucial double goal-line clearance early in the game, and marshalled his defence brilliantly.

Has been poor since his move from Burnley, but today was a day for backs-to-the-wall defending and the England international was excellent.

Recovered well from a nervy start to contribute to a huge defensive effort by the home side.

Broke up play brilliantly, a big performance by the much criticised Frenchman.

Completely ineffective and hooked at the break.

Was full of energy until injury cut his game short early in the second-half.

Had a couple of decent moments in first-half, but was sacrificed to accommodate a tactical switch in the second period.

Worked hard, but never really got the ball in good enough areas to hurt Chelsea.

Is a real handful in the lone striker role, although he spurned Everton’s only real chance when he chose to shoot instead of laying it off to Sigurdsson.

Worked hard, but doesn’t looked suited to the Premier League at all.

Slotted into the defence nicely and his experience was crucial as Chelsea piled on the pressure.

Put in a decent shift.

Could have stayed at home, Everton didn’t manage a single shot on target all game.

His mistake in the first-half handed Everton their only real chance of the game, but all in all another hugely impressive display.

Dealt with anything that came his way easily.

Got through a huge amount of work down the right flank, although his delivery did let him down at times.

Covered a huge amount of distance in the centre of the park and passed well.

Poor. Sloppy touch and passing, needs to be improve and fast.

Another decent shift by one of Chelsea’s most consistent performers.

Just couldn’t get into game.

When he’s good he’s really good, but when he’s poor he’s really poor, today he was the latter.

Showed a couple of flashes of brilliance, however he just couldn’t find enough space up against the home sides packed defence.

Conte obviously does not trust the young striker and he did little to change his managers mind during his cameo.

Tired to find that killer pass after his introduction, but came up against a well organised Everton defence.