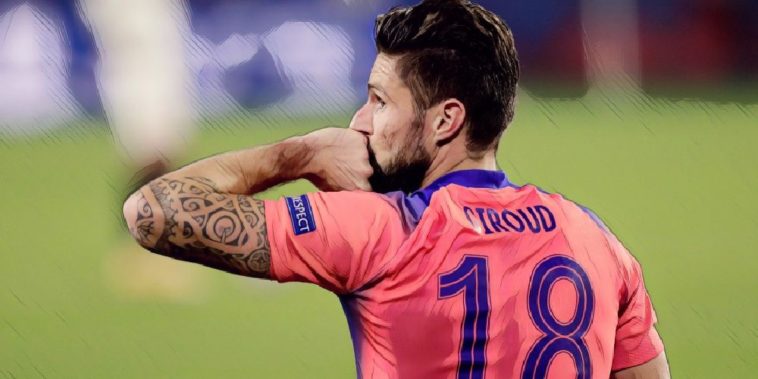 Olivier Giroud wrote himself into the history books last week with a four-goal haul in Chelsea’s 4-0 thrashing of Sevilla, eclipsing Cristiano Ronaldo to become the oldest hat-trick scorer in the history of the Champions League.

Giroud made the most of a rare opportunity to seal Chelsea’s progress to the last 16 as group winners, his masterclass in finishing seeing the France international join an exclusive list of players to score four times in a Champions League fixture.

Giroud also became just the fourth player to score four times in a Champions League fixture after turning 30 and we’ve decided to look back on the players to have achieved the feat.

Here are the four players to score four UCL goals in a single fixture after their 30th birthday:

Zlatan Ibrahimovic became the first player to score four times after reaching 30, the evergreen forward helping himself to four goals in Paris Saint-Germain’s 5-0 thumping of Anderlecht in 2013.

Ibrahimovic’s virtuoso display saw PSG set a new record for their biggest ever European away victory, helping himself to a first-half hat-trick as the Parisians dismantled their Belgian opposition.

The Swede tapped into an empty net following a cross from Gregory van der Wiel to open the scoring, before the same combination delivered a second just five minutes later, Ibrahimovic turning home with a clever backheel.

His hat-trick goal came in extraordinary circumstances following a blockbuster effort from distance, a stunning strike that was even applauded by the home supporters.

📆 OTD in 2013, Zlatan Ibrahimović helped himself to FOUR goals against Anderlecht 🔥

His second and third were out of this world 😳😍 pic.twitter.com/srjZ6To1pm

Ibrahimovic clinically struck his fourth and PSG’s fifth following a pass from Thiago Motta, a dominant display from the visitors inspired by their talismanic Swedish star.

Each of the Poland international’s goals came in the second half in what proved a ruthless display of finishing from Lewandowski, netting his first from the penalty spot before reacting first and turning in from close range for a quick-fire second.

Lewandowski glanced home a header for his third before rolling a fourth past the goalkeeper, taking his record to an incredible 10 goals in just five group stage fixtures for Bayern in last season’s competition.

The forward’s instinctive finishing ability saw him finish as the Champions League’s leading scorer with a huge 15 goals for the 2019/20 campaign, a season which saw Bayern crowned as champions of Europe for a sixth time as part of a historic treble.

Atalanta have won many admirers for their free-scoring attack since rising to prominence in recent seasons, including a memorable run as Champions League debutants last season.

After losing each of their first three group stage fixtures they bounced back to qualify for the knockout stages, where they were drawn to face Valencia in the last 16.

Atalanta thrashed the Spaniards 4-1 in the first leg before edging a thriller in the return, Josip Ilicic scoring four times during a 4-3 win at the Mestalla.

The Slovenia international scored twice from the penalty spot in a topsy-turvy second leg in Spain, before completing his hat-trick with a driven low finish to level the scores at 3-3 on the night and restore Atalanta’s three-goal advantage on aggregate.

Ilicic capped a fine night with a thumping finish for his fourth, sealing an 8-4 success on aggregate for Atalanta who became the first debutants since Leicester City in 2016/17 to reach the quarter-finals.

The man of the moment for Chelsea, Olivier Giroud sent a message to manager Frank Lampard with a wonderful display of finishing as the west London side thrashed Sevilla.

Giroud has struggled for opportunities at Stamford Bridge as a wealth of summer signings have pushed the veteran down the pecking order, though he showed there is plenty left in the tank with a performance of the highest quality.

Chelsea dominated from the opening minute and Giroud opened the scoring with a curling left-footed finish, receiving a pass from Kai Havertz before checking onto his stronger side and firing home.

The 34-year-old then lifted a delightful second over the advancing goalkeeper early in the second half, before completing a perfect hat-trick by glancing home a magnificent header from N’Golo Kante’s cross.

The France international completed the rout from the penalty spot to secure Chelsea’ progress as group winners, delivering a performance that has presented Lampard with a huge selection headache ahead of this weekend’s clash with Leeds.