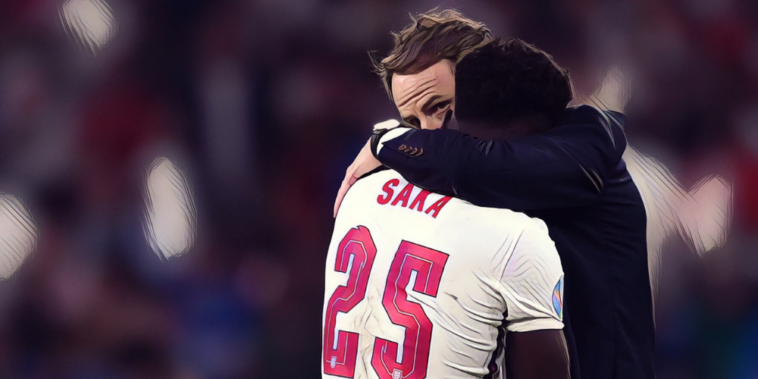 England’s players were reportedly ‘shocked’ at Gareth Southgate’s decision to give Bukayo Saka the decisive fifth penalty during their Euro 2020 final shoot-out defeat to Italy.

Gianluigi Donnarumma saved Saka’s crucial effort to crown Italy champions of Europe at Wembley, with the teenager subsequently consoled by teammates as the Azzurri celebrations began.

Questions have since been asked regarding Southgate’s decision to hand the youngster such responsibility, with the 19-year-old the youngest member of the England involved during the final defeat.

According to the Mail, Southgate’s decision to hand Saka the fifth penalty is understood to have left some of the Three Lions’ squad ‘shocked’, given the presence of more senior teammates on the pitch.

Roy Keane criticised players such as Raheem Sterling and Jack Grealish for not taking a kick ahead of the teenager, though the latter has since insisted he had volunteered to step up with Southgate selecting his takers based on performances in training.

England have practised penalties in every single training session since September’s internationals, with assistant manager Steve Holland keeping track of player performance to create a ‘league table’ of penalty takers.

Harry Kane and Harry Maguire took England’s first two penalties to put England 2-1 up in the shootout before the Three Lions missed their final three from the spot.

Marcus Rashford and Jadon Sancho were also both selected given their performance in training, but both missed after being substituted in the final moments of extra time.