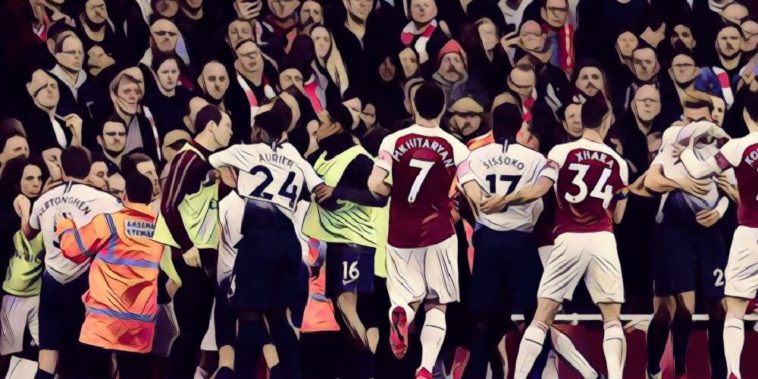 Unai Emery has praised the Arsenal faithful for producing a ‘very big’ atmosphere during their 4-2 win over Spurs in the North London derby this afternoon.

It was a raucous atmosphere inside the Emirates from start to finish, with the supporters inside the stadium being treated to another epic encounter, with Arsenal running out 4-2 winners.

It wasn’t plain sailing for the Gunners though, who, having taken an eighth-minute lead, went into the break behind (again) thanks to goals from Eric Dier and Harry Kane. Three second-half goals would, however, see the hosts leapfrog their North London rivals into fourth in the Premier League table, and speaking after the game, Unai Emery praised the role of the fans.

“I think this is our process and also today with our supporters here the atmosphere was very big, they push a lot for us,” Emery told Sky Sports.

“I felt we needed something different on the pitch. Above all our situation is for me the reason to do that. Aaron [Ramsey] knows this derby and his spirit is important, secondly the possibility with [Alexandre] Lacazette to find when there are chances, his efficiency is very big.

“We are watching last week Tottenham play at home against Chelsea and they won, and very big, big performance with their supporters. We said we can do, change the performance for us, positive and break their moment. Not easy, but with our supporters it can be that. Very important today here the atmosphere.

“I want to do more. Last week three points in Bournemouth is the same. We need first to win three points there because we can’t play here with possibility to go above Tottenham in the table. For supporters it is a special match, for us too because we want to give them a special match. But for now I am already thinking Wednesday in Manchester.”

See Also: Emery reveals what gave Arsenal the will to win