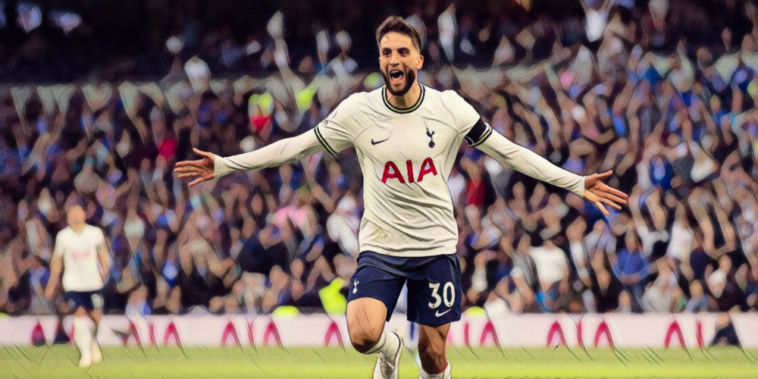 Tottenham travel to face Arsenal in a North London match-up as even as any in recent memory, with both teams in confident mood after their strong starts to the season.

The memories of last season’s duels are also fresh in the mind, as both fixtures ended in comprehensive wins for the home team. Spurs were cut apart on their last visit to the Emirates and the task for Antonio Conte will be to ensure that his side are compact against the league leaders this weekend.

Spurs beat Leicester 6-2 last time out, but it was a result that flattered Conte’s team who for the opening exchanges were second-best to the struggling Foxes. The decision to bring on Yves Bissouma added strength in midfield and saw Spurs overrun Leicester, as Son Heung-min scored a hat-trick inside the final 17 minutes to gloss a generous scoreline.

Antonio Conte on potentially using a 3-5-2

"It could be a good option because we have midfielders who are good in a three. [Yves] Bissouma when he came in against Leicester played well and he was really good integrating with Pierre[-Emile Hojbjerg] and Rodrigo [Bentancur]. pic.twitter.com/3kNYbwS7A0

Bissouma has had to be patient for his chance since arriving from Brighton in the summer and has made just one league start to date. His energy and tenacity – coupled with the axis of Rodrigo Bentancur and Pierre-Emile Hojbjerg – has the potential to overpower an Arsenal midfield that could be without Thomas Partey.

“For sure it can be a good option because we have midfielders who can play as a three,” Conte said at his pre-match press conference. “Bissouma when he came in against Leicester he played well and he is really well integrated with Pierre and Bentancur. Yeah this could be an option, not only for tomorrow but for the future.”

Despite his appointment at Chelsea in early September, Graham Potter has been forced to wait until the following month to take charge of his first Premier League game.

Potter’s unusual route to the elite has been well-documented with his appointment reward for a rise from humble beginnings. There will be intrigue around how he adapts to the step up, as he looks to implement his flexible tactics at Stamford Bridge.

Working for the weekend. 👊 pic.twitter.com/ALMDlohGhK

His first game – a 1-1 draw with Red Bull Salzburg in the Champions League – saw Raheem Sterling impress in an unfamiliar role at wing-back, having been used as a centre-forward for much of his Chelsea career to date.

Potter will be aided by similarities between his Brighton team and Thomas Tuchel’s Chelsea. Each preferred a back three, while both were teams who sought control but lacked reliable end product at the top end of the pitch.

The wide options in Potter’s teams have been crucial and his arrival gives the likes of Christian Pulisic and Hakim Ziyech a chance to reignite their careers in west London. Armando Broja will be confident that he is the profile of centre-forward – full of power and hustle – to lead the line.

Potter’s exit to Chelsea left a void to be filled at Brighton, who have since named Roberto De Zerbi as the club’s new manager. Chairman Tony Bloom has promised ‘an exciting and courageous brand of football’ under the new boss, who left Shakhtar Donetsk in July amid Russia’s invasion of Ukraine.

The Italian previously had success with an over-achieving Sassuolo side and will be tasked with keeping Brighton upwardly mobile. De Zerbi’s reputation for building entertaining teams who press with intensity appears well-suited to the Seagulls, who are fourth in the Premier League at present after a strong start under Potter.

A new era for Brighton begins on Saturday 🔵⚪️

How will De Zerbi get on❓ pic.twitter.com/EJD0VTqBtn

The 43-year-old faces a tough test on debut, however, as Brighton travel to face a Liverpool side who have remained unbeaten at Anfield in three of the past four seasons. The Reds have been below their usual best so far this season and Brighton – who earned a 2-2 draw on Merseyside last season – will be hoping to kick-start the De Zerbi era with an upset.

Mitrovic the match-winner Newcastle could use

Aleksandar Mitrovic is having quite some season with the forward having been in career-best form across the past 18 months. Mitrovic hit a record-breaking 43 Championship goals last season and has begun the Premier League campaign in fine form, with only Erling Haaland having outscored the Serbian so far this season.

Mitrovic continued his goalscoring run during the international break, with four goals in two games for Serbia. He has now scored 48 goals in his past 58 appearances at international level and celebrated his 50th goal for the national side in midweek – achieving the feat far faster than either Cristiano Ronaldo or Lionel Messi did for their respective nations.

The 28-year-old is exactly the sort of match-winner that Newcastle could use right now. Eddie Howe’s team have been tough to beat this season, losing once, but have failed to win since the opening weekend. Five draws from their first seven games demonstrates the lack of cutting edge in a team that has sorely missed Callum Wilson.

There will no doubt be a sense of what might have been when Newcastle take on Fulham this weekend, with Mitrovic up against his former team. The sharp-shooting Serb was given just 33 league starts during his two-and-a-half seasons at St James’ Park, before finding a home in west London.

West Ham were pushing for a place in the top four at this stage last season, but after seven games are marooned in the bottom three this time around.

Expectations were high following consecutive European qualifications and a big summer spend, but David Moyes’ team have looked out of sorts and have won just once in the Premier League.

An over-reliance on Jarrod Bowen and Michail Antonio has been evident following the duo’s drop-off in form and now is the time for Moyes to place trust his summer signings. Lucas Paqueta, Gianluca Scamacca and Maxwel Cornet arrived for a total fee in the region of £100m, but have featured for just 389 minutes combined in the Premier League to date.

Scamacca’s use has been particularly puzzling given Antonio’s form and his record of three goals in four European games this season. The Hammers face Wolves this weekend in a match-up between the division’s lowest scorers and Moyes must find a match-winner to get West Ham’s season up and running.

Manchester United make the short trip to the Etihad this weekend, in what will be a huge test of Erik ten Hag’s improving team.

City outclassed their neighbours in both fixtures last season, following a performance of complete control at Old Trafford with a ruthless Kevin De Bruyne-inspired thumping of the Red Devils on home soil.

The manner of those defeats emphasised the gulf between the Mancunian rivals, as United were starved of possession in embarrassingly easy wins for Pep Guardiola’s side.

Now under new management, United take on City with increased confidence after a four-game winning run. That sequence has included wins over both Liverpool and Arsenal, in which United have utilised the counter-attack to devastating fashion.

More of the same will be required in order to earn a positive result this weekend, while the blossoming partnership of Raphael Varane and Lisandro Martinez face their toughest assignment in Erling Haaland. It is an examination few defences have passed so far this season.

Gerrard must fix away day woes

An ugly win over Southampton lifted some of the growing pressure on Steven Gerrard before the international break, but consistent results are required if Aston Villa are to climb away from the bottom three.

Villa are 15th at present and just three points above the relegation places ahead of this weekend’s trip to face Leeds. Gerrard will need his team to improve on a poor recent record on the road, having lost their last four away games in the Premier League – conceding ten goals in the process.

"Hopefully we can build on that." 💪

Ollie Watkins reflects on a positive September and looks ahead to our trip to Elland Road on Sunday. 🗣️ #LEEAVL

Villa will also be without a number of influential names after Lucas Digne joined Boubacar Kamara, Diego Carlos and Matty Cash on the sidelines. Gerrard will, however, take encouragement from Villa’s record at Elland Road with the club having won both Premier League fixtures at the venue since Leeds’ return to the Premier League in 2020.

Things are looking bleak in the East Midlands at present, ahead of a first top-flight meeting between Leicester and Nottingham Forest since the late nineties.

Leicester are bottom of the division after six straight losses, with their last two having seen the Foxes ship 11 goals in consecutive collapses to Brighton and Tottenham. There were encouraging signs during the opening period at Spurs, but an inability to do the fundamentals defensively will continue to undo Brendan Rodgers’ side without change.

We face Nottingham Forest under the lights on Monday 🏟#LEINFO pic.twitter.com/IdXy7X6ieq

Forest’s return to the top tier was celebrated and followed by an extraordinary summer spend, but the scattergun recruitment drive has left Steve Cooper with no clear idea of his best team.

Finding a settled side and allowing it time to gel will be crucial to Forest’s hopes of survival, with four points from their opening seven games leaving Cooper’s team in the bottom three and above only this weekend’s opponents.