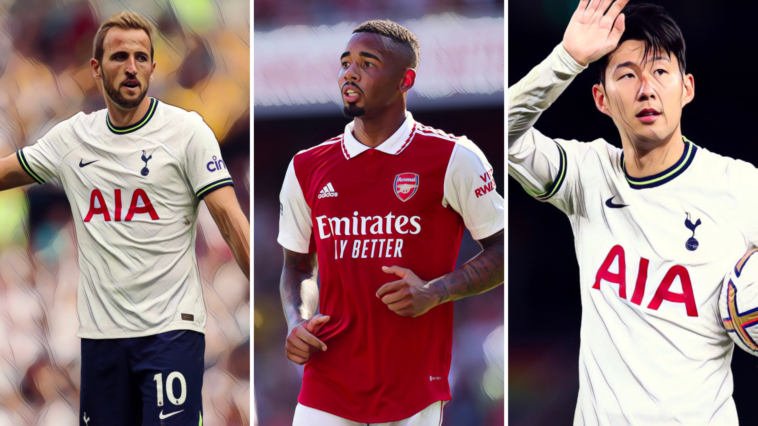 Arsenal take on Tottenham in the Premier League this weekend with both teams having started the season in strong form.

The north London rivals are as evenly-matched as any period in Premier League history, with Spurs having narrowly pipped their neighbours to Champions League football last season.

Arsenal have bounced back this season and lead the Premier League after seven games, though Antonio Conte’s team are unbeaten and arrive at the Emirates just a point behind the table toppers.

Ahead of what promises to be a showdown in the capital, we’ve attempted to pick our North London derby combined XI.

Hugo Lloris earns inclusion in our combined XI, with the World Cup-winning captain retaining his class and presence into the latter stages of his career.

Lloris has provided a decade of consistent service to Spurs and ranks fourth in the Premier League for save percentage this season. The France international betters Aaron Ramsdale for saves (16), crosses caught (eight), and has made less errors leading to a shot on goal (zero) than his Arsenal counterpart in 2022/23.

Yet another big performance from Hugo Lloris 👏 pic.twitter.com/FH10CdArCo

Ben White has been moved into a somewhat unfamiliar role at right-back this season, but has stuck to his task impressively with a string of strong performances.

White’s consistent displays have kept Takehiro Tomiyasu out of the team so far this season, with the Japan international forced into a spell on the sidelines following his teammate’s good form.

A surprise omission from the England squad for the recent break, White – who earns inclusion over Spurs’ unconvincing right-back options in our combined team – will be confident of a place in Qatar if he can maintain the levels set during the season so far.

Cristian Romero’s front-footed brand of defending has made him a fans favourite at Tottenham, with the centre-back fast developing a reputation as one of the Premier League’s best defenders.

Aggressive and aware when danger presents, Romero’s mix of South American tenacity and comfortability in possession have seen him shine in English football.

His emergence with the national side is a key reason why optimism is growing around Argentina’s upcoming World Cup campaign with La Albiceleste unbeaten in 35 games in all competitions. Romero has won 12 caps since his debut in 2021, a period which has seen Argentina keep ten clean sheets and concede just twice.

William Saliba has made quite the impression in his Premier League career date, having emerged as one of the stars of the season so far at Arsenal.

Having returned as the Ligue 1 Young Player of the Year after an impressive loan at Marseille, Saliba’s overdue chance with Arsenal has been well worth the wait.

The 21-year-old has been a classy and commanding presence for the Gunners, who lead the Premier League after seven games. Saliba has started each of those fixtures, scoring twice, and has already broken into a France team boasting huge depth and names at centre-back.

One of the summer signings who have taken Arsenal up a level this season, Mikel Arteta raided former side Manchester City for the signatures of Oleksandr Zinchenko and Gabriel Jesus.

Each have had an integral role in the club’s strong start, with Zinchenko offering technical quality whether overlapping down the left flank or drifting inside to create midfield overloads.

Having won four Premier League titles at the Etihad, Zinchenko will hope to translate that winning mentality to a team who appear on the rise in north London.

Rodrigo Bentancur has been a shrewd signing for Spurs since his arrival from Juventus in January, with the midfielder having provided a classy poise at the base of Antonio Conte’s engine room.

An outstanding technician at ease in possession, he has proven a perfect pivot alongside Pierre-Emile Hojbjerg during Spurs’ run to Champions League qualification last term and unbeaten start in 2021/22.

💬 “I think we play well when he plays well, that’s the biggest compliment I can give him.”@ericdier on Rodrigo Bentancur 💙 pic.twitter.com/15b4GSiY2q

Eric Dier was gushing in his praise for the Uruguayan after he opened his goalscoring account for Spurs last time out, outlining his belief that the north Londoners are a better team when Bentancur is on song.

Martin Odegaard has grown into his role as Arsenal captain this season, with the Norwegian leading by example during the Gunners’ strong start.

A key cog in the side, his control and creation are central to the Arsenal’s attacking moves with the midfielder possessing an ability to spot a pass that few others can.

Odegaard appears to be fulfilling the potential hyped since his emergence as a teenager and the challenge now will be to turn his invention into tangible rewards. He has three goals from six starts in the Premier League this season.

Bukayo Saka beats off competition from Dejan Kulusevski and Richarlison to make our combined team, having emerged as a leading figure in Arsenal’s recent revival.

The 21-year-old has shouldered responsibility for the Gunners across the past two campaigns and has won Arsenal’s Player of the Season accolade in successive seasons. He has made a brilliant start to the current season with a goal and four assists already, with only Kevin De Bruyne having created more goals in the Premier League.

An electric cameo off the bench for England earlier this week demonstrated the spark his direct approach can bring to a team.

Son Heung-min has been below his usual standard so far this season, but a scintillating showing against Leicester saw the forward return to his brilliant best.

Son struck a second-half hat-trick to get his season up and running, following a career-best campaign in 2021/22 that saw him win the Premier League’s Golden Boot.

Explosive, exciting and occasionally unplayable, Son is a genuine world-class talent capable of scoring stunning goals off either foot.

Our combined team features a front two with the number nines of both teams difficult to ignore. Jesus has helped transform Arsenal since his summer arrival from Manchester City, with much of the Gunner best football having come directly through the Brazilian.

After a bit-part role at the Premier League champions, Jesus is revelling in his main man status at Arsenal and his confidence has visibly returned over the season’s opening weeks.

He has four goals and three assists in seven league games for the Gunners, while his work-rate and intelligent movement have allowed Mikel Arteta to implement a productive press from the front.

Arsenal will need no warning about Harry Kane this weekend, a footballer who has tormented the Gunners in past North London derbies.

Kane has scored a record 13 goals in just 15 league appearances against Spurs’ fiercest rivals, while he needs just one more goal to move past Thierry Henry as the outright leading Premier League scorer in all London derbies.

Next up: the North London Derby ✊ pic.twitter.com/q0YVwButp9

The 29-year-old has been in excellent form in recent weeks and has six goals for the campaign, a figure only Erling Haaland has bettered over the season’s opening weeks. His 16 chances created are also a leading total among all English players, with Kane an elite talent and a potential match-winner this weekend.