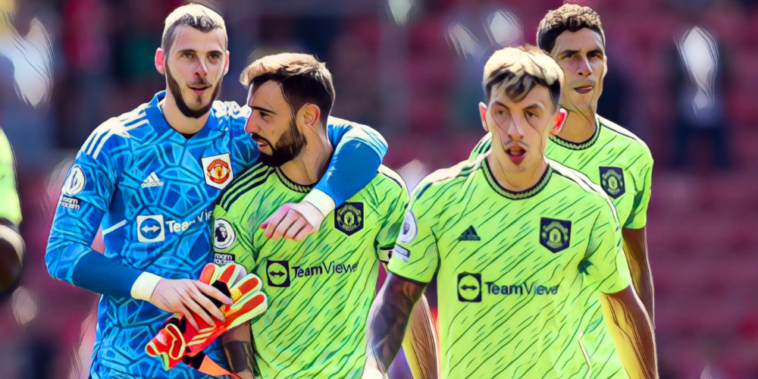 Eze edging back to his best

Eberechi Eze has began the new season in fine form, with the Crystal Palace midfielder edging back to his brilliant best.

The 24-year-old saw a serious Achilles injury restrict him to just six Premier League starts in 2021/22, but after a full pre-season he has hit the ground running this time around.

No player in the Premier League has completed more successful dribbles than Eze (15), while he has become just the third Palace player – after John Salako in 1992 (four in a row) and Christian Benteke in 2018 (three) – to register assists in three consecutive away games.

After a fine pass released Wilfried Zaha to score at Liverpool, he provided a perfect free-kick for Joachim Andersen to head home at Manchester City last time out. A wonderful watch in full flight, his invention can help bring the best from Zaha this season as Palace continue to progress under Patrick Vieira.

Gareth Southgate is an admirer and named the uncapped Eze in his 33-man provisional squad for Euro 2020, before injury ruined his chance of a maiden cap. Nigeria are waiting in the wings should the Three Lions not provide the midfielder with another chance.

Graham Potter’s Seagulls are soaring during the season’s opening month, having set a new club-record of nine Premier League games unbeaten to sit in the division’s top four.

Results have been almost perfect for Brighton, but familiar flaws remain in a side whose wastefulness in-and-around goal has been problematic in recent campaigns. Pascal Gross’ goals have helped Brighton to wins over Manchester United and Leeds, with Potter believing the German is operating at the highest level of his career to date.

The 31-year-old has scored three goals in four games, already beating his total (2) from the entirety of last season. Brighton need attacking reinforcements to add a new level of potency around goal, having squandered a succession of chances during both the goalless draw with Newcastle earlier this month and last weekend’s 1-0 win over Leeds.

Potter’s recruitment has been well admired since arriving on the South Coast, but the signing of a reliable goalscorer could take an improving Brighton up another level.

Gerrard up against it ahead of tough tests

Steven Gerrard is under pressure following a stuttering start to the Premier League season, with defeat to West Ham last weekend greeted with a chorus of boos at Villa Park.

Aston Villa have lost three of their opening four games and nine of their last 15 in the Premier League. A disappointing finish to last season has rolled over into the new campaign and things could get worse before they get better, ahead of clashes with league leaders Arsenal and Manchester City.

Philippe Coutinho injected verve into the side after arriving last January, but the Brazilian has failed to find his form during the season’s opening weeks and Villa’s reliance on his invention has been evident.

The likes of John McGinn and Lucas Digne have also performed well below expectations and Gerrard must get more from a talented group if he is to avoid following Scott Parker out of the Premier League’s managerial exit door.

Premier League management can be a cut-throat business and Scott Parker has been on the receiving end of a ruthless decision this week. Four games into the campaign and Parker is out of a job, sacked following last weekend’s humiliation at Liverpool.

Bournemouth opened the season with a win over Aston Villa, but have since lost consecutive games to Manchester City, Arsenal and Liverpool. Quite what had been expected from such fixtures is unclear, but the manner of those defeats – coming at an aggregate score of 16-0 after a record-equalling 9-0 loss at Anfield – has made Parker’s position untenable in the eyes of the Bournemouth board.

The credit in the bank for guiding the club back into the Premier League at the first attempt has evaporated inside the season’s opening month, despite a modest backing this summer that has seen just two players – Marcos Senesi and Marcus Tavernier – arrive for fees.

Have Bournemouth pressed the Premier League’s panic button? Or was this a decision made before things got worse? Only time will tell, ahead of a fixture list that could define their season. The Cherries take on Wolves on Wednesday evening, before clashes with Nottingham Forest, Brentford, Fulham and Southampton before mid-October.

Alvarez itching for a City start

Julian Alvarez’s arrival at Manchester City has been somewhat overshadowed by the presence of a certain Norwegian, with the former restricted to just short cameos as Haaland has headlined the season’s opening month.

After a goal off the bench in the Community Shield, the Argentine made his most telling contribution in the Premier League last weekend. Introduced just after the hour, he made an instant impact with involvement in the build-up to City’s equaliser against Palace.

Julián Álvarez did not misplace one pass as he completed 20/20 passes. He also got fouled twice, the most for a Manchester City player vs. Crystal Palace. This via @argentidata. 🕷🇦🇷 pic.twitter.com/aLh6DuGq8U

Alvarez’s introduction provided Palace with an additional problem with his work-rate occupying defenders, as City’s comeback kings did it again to reverse the result from two goals down.

Pep Guardiola has spoken on the need for rotation as the games come thick and fast and a home clash with Nottingham Forest could be the perfect chance for involvement from the off. The 22-year-old will be desperate to translate a record of 85 goals and assists in 122 appearances for River Plate into English football.

Richarlison ready for a Spurs start

For all the talk of Spurs’ summer signings, Antonio Conte has largely stuck with the tried and tested across the season’s opening weeks.

Ivan Perisic is the only member of the new arrivals to have earned a regular role in the side, with both Richarlison and Yves Bisouma given just cameo appearances across the first four fixtures.

The former is pushing hard for a place in the side and followed an impressive impact off the bench against Chelsea with another strong showing last weekend. The Brazilian – who irked the Nottingham Forest fans and Brennan Johnson with some needless showboating at the City Ground – produced a wonderful assist for Harry Kane with the outside of the boot.

Conte has hinted that Richarlison is nearing a first start for Spurs and could use the midweek trip to West Ham as a chance to test the summer signing. Dejan Kulusevski’s fine form has kept Richarlison out of the team to date, but with Heung-Min Son having struggled across the opening weeks it could open a chance for the former Everton forward.

Saint-Maximin vs Alexander-Arnold a decisive battle

Liverpool and Newcastle have produced some classic contests in the Premier League era and among the most fascinating sub-plots of their latest showdown will be the match-up between the in-form Allan Saint-Maximin and Trent Alexander-Arnold.

The latter remains arguably the Premier League’s greatest paradox, a full-back whose invention from deep has set a new standard among defenders. Already this season we’ve seen the best and worst of Alexander-Arnold, a footballer whose faults are accepted at Anfield given the qualities he brings to the team.

After a nightmare showing in defeat at Manchester United, questions were again asked about the 23-year-old’s defensive strength as Marcus Rashford and Anthony Elanga exploited Alexander-Arnold one-against-one and the space in behind.

He responded with a perfect playmaking performance in the 9-0 thrashing of Bournemouth, a contest which demonstrated the best of the right-back. His 123 touches included six crosses, three chances created and a stunning goal from distance, while he won 100% of his tackles and duels amid admittedly limited defending.

His brilliance going forward needs to come alongside defensive progress however, and Wednesday’s clash will pit Alexander-Arnold among one of the division’s trickiest customers as Saint-Maximin’s dancing feet arrive at Anfield.

Erik ten Hag made the decision to maintain Harry Maguire as Manchester United captain this season, opting against a major call in the early part of his reign.

Maguire’s status as club captain has been questioned over a long period of poor performances, with criticism over his leadership – or perhaps lack of – in difficult moments for the Red Devils.

Having lost his place in the side in recent weeks, there are now huge doubts over his long-term status as skipper. Bruno Fernandes has worn the armband in recent fixtures and has looked somewhere closer to his best, revelling in both the responsibility of the armband and absence of Cristiano Ronaldo from the side.

Fernandes was phenomenal across his opening 18 months in Manchester, but a shift in role following Ronaldo’s arrival saw performances dip. An improved showing against Liverpool was followed with a first goal of the season at Southampton last weekend and the midfielder has looked a suitable skipper during the team’s turnaround from a shaky start.