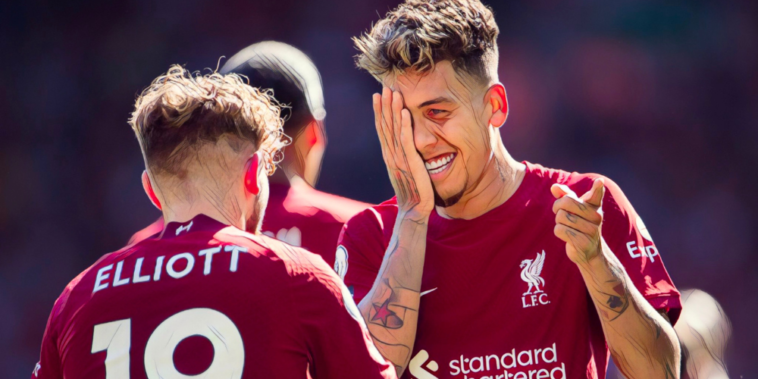 Roberto Firmino was not alone in producing a poor performance at Manchester United last Monday, but the forward’s anonymous showing saw him on the receiving end of criticism.

The Brazilian had been linked with an exit this summer following the arrival of Darwin Nunez, but the Uruguayan’s suspension – and injury to Diogo Jota – have seen Firmino thrust back into the side.

Firmino has always been a curious player to assess, a forward whose finest work often comes away from the penalty box. Those inside the club’s circle have never doubted his importance, but others have pointed to a modest goal record that has seen Firmino reach 20+ goals in all competitions just once since signing for Liverpool. Even in the club’s 2019/20 title-winning campaign of 99 points, he failed to get on the scoresheet at home until the final Anfield fixture of the season.

At his best, however, Firmino has been at the centre of Liverpool’s best performances and a man Klopp described as the ‘engine’ of the side rolled back the years to reach top gear this weekend. Firmino was involved in five goals as Liverpool hit Bournemouth for NINE, registering a hat-trick of assists inside 28 minutes before notching two of his own – one trademark no-look finish included.

Roberto Firmino joined Mohamed Salah and Luis Suarez as the only Liverpool players to have FIVE goal involvements in one Premier League game 🖐 pic.twitter.com/H5hPfBSS9L

Firmino may no longer be considered an automatic starter in this side, but Klopp has no reservations over his role or quality.

Bournemouth struggled to deal with his movement off the front as he created gaps and allowed others to exploit space. This could prove to be his final season in red after entering the final 12 months of his deal, but there might yet be more moments of the old magic before he departs.

Concerns for City at set-pieces?

Manchester City remain unbeaten this season and in touch at the top, but the champions will be concerned with the manner in which they are leaking goals.

For the fourth time in six Premier League fixtures dating back to last season, City found themselves two goals down before coming back to rescue a result. Both goals conceded to Crystal Palace this weekend came from set-pieces, which – after also conceding from a set-piece to Newcastle last week – will raise alarm bells.

Last season City conceded just one set-piece goal across the entire campaign and Pep Guardiola was vocal in his criticism of his side after Palace punished their sloppy dead-ball defending.

“If you play against Liverpool it’s Van Dijk, Matip. He was alone. This is because you are not there, if you are not there it’s going to be 2-0. Today we were lucky but tomorrow we won’t be lucky and we’ll drop points.”

A week can be an awfully long time in football. Just seven days ago there were major doubts around Lisandro Martinez, with no shortage of pundits and fans sceptical about Manchester United‘s summer signing.

The narrative surrounding Martinez has been his lack of height for a centre-back, with the opening two fixtures of the campaign having seen both Brighton and Brentford adopt a more direct approach in a bid to expose the Argentine.

Those defeats saw questions asked, but Martinez has since found his form as United have responded with successive wins. The return of the excellent Raphael Varane has seen the duo form an encouraging understanding, with Monday night’s win over Liverpool followed by a victory – and first clean sheet of the season – at Southampton.

The Argentine’s combative style compensates some for a lack of stature, with Martinez winning each of the five aerial duels he contested at St Mary’s. According to fbref.com, the 24-year-old has won 88.9% of his aerial duels so far this season, a figure higher than the likes of Virgil van Dijk (87%) and Kurt Zouma (85.1%).

Lisandro Martinez won 5 out of 5 aerial duels against Southampton today.

More than any other player on the pitch.

Not tall enough for the Premier League? 🤷‍♂️ pic.twitter.com/R43aIwivE0

On the ground he was similarly tenacious with 100% of his ground duels won, while he completed each of his attempted dribbles and made seven clearances.

There will no doubt be moments when Martinez is tested physically this season and the Premier League’s strongest strikers will be sure to challenge the centre-back’s credentials. However, after a shaky start, there has certainly been improvement and the doubters are getting a little less.

Allan Saint-Maximin was scintillating during Newcastle’s draw with Manchester City last weekend, with the winger’s electric brand of football causing countless problems for the champions.

Saint-Maximin has always been box-office viewing, arguably the most watchable footballer in the Premier League when in the mood. The 25-year-old’s problem has been consistency, while a modest record of 13 goals from 97 games must improve if the Frenchman is to reach the next level.

Eddie Howe has called upon the winger to ‘bring it’ every week after tormenting City last weekend and Saint-Maximin delivered again during the 1-1 draw at Wolves.

Allan Saint-Maximin with the equaliser 🔥🔥 pic.twitter.com/F4aukcdfN3

While less effective than last week, he remained Newcastle’s biggest threat and salvaged his side a point with a wonderful late equaliser. His volley from the edge of the area was a brilliant strike, one which maintained the Magpies’ unbeaten start and strengthens Saint-Maximin’s chances of receiving a maiden call-up to the France squad.

It’s another test with Liverpool in midweek and the battle between Saint-Maximin and Trent Alexander-Arnold will be one of the game’s most fascinating sub-plots.

Graham Potter’s fine work at Brighton continued this weekend, with a 1-0 win over Leeds continuing the Seagulls’ unbeaten start to the campaign. It’s now ten points from four games for Potter’s side, who have taken the departures of big name players in their stride.

Yves Bissouma’s exit has barely been felt as Moises Caicedo continues to grow in stature and confidence. The 20-year-old has made a major impression since breaking into the side during last season’s run-in and his performances have already seen the midfielder linked with being the next eye-catching talent to capture the attention of the Premier League’s biggest clubs.

Caicedo has been joined this summer by international teammate Pervis Estupiñan, a recent recruit from Villarreal brought in to replace Marc Cucurella. Caicedo revealed he had endorsed the South Coast to his compatriot and Estupiñan had already made an impression.

No player created more chances than the full-back (3) during the win over Leeds, as the defender marked his home debut with a livewire performance down the left.

Potter’s planning and shrewd recruitment has had Brighton punching above their weight and a challenge for Europe is not out of the question on current form.