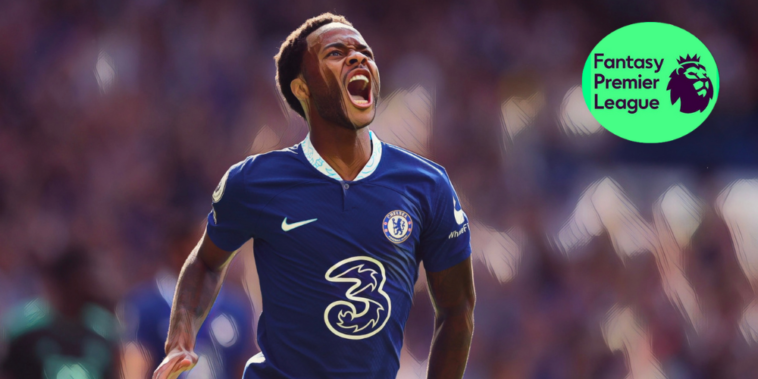 Big hitters Erling Haaland and Harry Kane delivered in gameweek four, but there was a blank for the heavily captained Mohamed Salah despite Liverpool hitting NINE past Bournemouth.

Ahead of a midweek round of fixtures, we once again look at four of the best captaincy options.

Raheem Sterling vs Southampton (A)

Raheem Sterling is up and running in Chelsea colours, with the forward’s double against Leicester earning the west Londoners a 2-1 win in gameweek four.

Sterling has started the season in a centre-forward role for Chelsea, where he has been granted a licence to drift into dangerous areas.

His advanced role and classification as a midfielder make Sterling one to watch in the coming weeks, with the England international’s ownership standing at just 6.1% at the time of writing.

He could be a perfect differential option in gameweek five, as Chelsea travel to face Southampton. The Saints have failed to keep a clean sheet so far this season with only two teams – Bournemouth (16) and Leicester (10) – having conceded more goals than Ralph Hasenhuttl’s side

😍 Midfielders that play up top 😍

Raheem Sterling (£9.9m) notched his 5️⃣1️⃣st double-figure haul in #FPL with a brace against Leicester pic.twitter.com/tqCm1qqQJu

Confidence increased from a match-winning brace at the weekend, Sterling could hit the kind of purple patch that became familiar at Manchester City. Chelsea have won the last three meetings between the teams and won 6-0 at St Mary’s last season.

If you were among the FPL managers (we were) who overlooked Erling Haaland in gameweek four, you’re probably feeling pretty foolish after the Norwegian goal-machine helped himself to a first Premier League hat-trick.

City were two goals down at half-time to Crystal Palace, before Haaland’s heroics helped turn defeat into a 4-2 victory.

Premier League defences have already felt the full force of the marquee man, who has hit six goals in just four league appearances so far this season. Haaland leads the league for goals, goal involvements, shots, shots per game and non-penalty xG, with a steady stream of service sure to result in more goals.

Newly-promoted Nottingham Forest travel to the Etihad in gameweek five, the latest side tasked with containing a forward already eying the Golden Boot.

FPL managers were left cursing Mohamed Salah in gameweek four, as the Egyptian somehow managed to blank despite a record-equalling win over Bournemouth.

Liverpool’s 9-0 thrashing of the Cherries equalled the Premier League’s all-time biggest winning margin, though Salah failed to get on the scoresheet and missed a number of chances – including a sitter from just two yards out – he’d usually score in his sleep.

Liverpool are winning 5-0 at HT but Mo Salah hasn't contributed a goal or an assist.

If you have Mohammed Salah as fantasy captain, you may be experiencing a sensation where liquid drips from your eyes and down your cheek

Will Newcastle now feel the backlash?

Eddie Howe’s team have been solid so far and remain unbeaten, but travel to face a Liverpool side who have not lost at Anfield in four of the past five seasons.

It’s not often that Salah – who leads the Premier League for chances created – blanks twice in succession.

Bruno Fernandes vs Leicester (A)

Is it time to get back on the Bruno bandwagon?

A once must-have asset is owned by just 2.1% of Fantasy Premier League managers at present, with the likes of Mohamed Salah, Kevin De Bruyne and Gabriel Martinelli the most popular midfield selections.

After blanks in the opening three gameweeks, Fernandes returned to the scoresheet with the winner as Manchester Untied beat Southampton 1-0 at St Mary’s.

Should he have it for good? ⓒ pic.twitter.com/K8pYAJG5SR

That goal – guided brilliantly into the far corner – followed on from a much-improved showing against Liverpool in gameweek three, with the Portugal international revelling in the absence of Cristiano Ronaldo.

Captaining the side with Harry Maguire out of favour, he is also likely to take penalties with Ronaldo joining Maguire in a watching brief across the last two league fixtures. United travel to face a winless Leicester side on Thursday evening and Fernandes’ share of set-pieces adds to his appeal given the Foxes’ poor record at defending such situations.