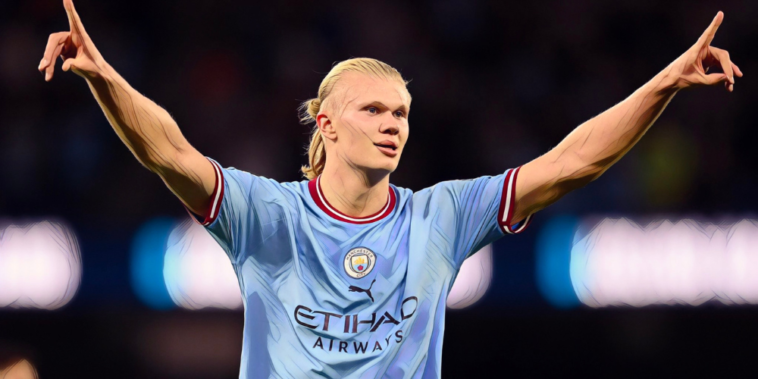 Erling Haaland’s incredible impact at Manchester City continued this week, as the forward scored a second successive hat-trick in the club’s 6-0 win over Nottingham Forest.

He became just the sixth player to score back-to-back trebles in the Premier League and did so in just his fifth appearance in the division.

Haaland has now set a new record for most goals in his first five appearances in the Premier League, having scored nine times at an average of a goal every 43 minutes.

It’s unlikely to be the last landmark the Norwegian hits in City colours and we’ve decided to look at eight Premier League records that Haaland will be targeting this season.

Haaland’s nine goals have already placed him joint-16th among the leading Norwegian goalscorers in Premier League history and his sights will be set on climbing those rankings.

Names including Brede Hangeland (10), John Arne Riise (21) and John Carew (38) appear further up the list, but Ole Gunnar Solskjaer’s record of 91 goals will take more than a season to reach.

However, Haaland can overtake his former Molde manager as the highest-scoring Norwegian in a single Premier League campaign.

On this day in 1996, Ole Gunnar Solskjaer scored just six minutes into his #MUFC debut! ⏱⚽ pic.twitter.com/Vq1ke4Gy7Z

He’s already half of the way to Solskjaer’s best ever campaign in the division, when the former Manchester United forward scored 18 league goals during the club’s 1995/96 title-winning campaign.

Sergio Aguero holds the record as Manchester City’s highest scorer in a single Premier League campaign, having reached 26 goals during the 2014/15 season.

His most productive campaign saw Aguero win the Premier League’s Golden Boot, remarkably his only leading scorer accolade in a career which saw him become the division’s most prolific overseas player.

Haaland’s early record is similar to Aguero’s introduction to the Premier League in 2011/12, when the latter scored eight times in his first five games. Haaland has gone one better, with his treble against Forest moving him to nine goals at the same stage.

Aguero’s most prolific season for City in all competitions came in 2016/17, with 33 goals scored.

Haaland has hit two hat-tricks for the season already, joining an exclusive group of Premier League players to have netted multiple trebles in the same campaign.

He has some distance to go to catch Alan Shearer’s record however, after the former Blackburn forward claimed five match balls during the 1995/96 season.

5 – Blackburn striker Alan Shearer scored five hat-tricks in the Premier League in 1995-96; the most of any player in a single season in the competition. Ridiculous. #OptaPLSeasons

Almost half of Shearer’s 31 goals came via hat-tricks, despite Blackburn struggling during a disappointing Premier League title defence. His 31 goals saw Shearer finish as the Premier League’s leading scorer for a second successive season.

Already four goals clear in the race for the Premier League’s Golden Boot, Haaland is the red-hot favourite to win the top-scorer award.

He could become the third Manchester City player to win the accolade, following Carlos Tevez (2010/11) and Sergio Aguero (2014/15).

Erling Haaland is the first player to score back-to-back hat-tricks in the Premier League since 2016/17 when Harry Kane managed it against Leicester & Hull.

Haaland has averaged 1.8 goals-per-game across the season’s opening weeks, almost double the best goal-per-game ratio of a Golden Boot winner. Harry Kane holds that record, having scored 29 goals in 30 games (0.97) for Tottenham during the 2016/7 season.

Haaland has made a mockery of suggestions he may need time to adapt to the Premier League, enjoying a record-breaking start around goal.

Having scored nine goals for the campaign to date, Fernando Torres’ record for the highest-scoring debut season from a foreign footballer is under real threat.

Torres scored 24 league goals after signing for Liverpool ahead of the 2007/08 campaign, breaking the previous record held by Ruud van Nistelrooy (23 – 2001/02).

Is Haaland set for the most prolific Premier League campaign ever?

Since the division moved to a 20-team format, no player has scored more goals than Mohamed Salah’s brilliant 2017/18 campaign.

Haaland will obliterate the record if he maintains his current level of averaging a goal every 43 minutes. In Salah’s record-breaking season, he averaged a goal every 91 minutes and had just three goals at this stage of the campaign.

Andy Cole holds the record for the Premier League’s most prolific debut season, having scored 34 goals during his first season in the division.

Cole fired Newcastle to promotion before exploding during the 1993/94 Premier League campaign, as he netted 34 goals. That return earned the forward the Golden Boot and PFA Young Player of the Year award, as the newly-promoted Magpies ended the season third.

34 – Andrew Cole netted 34 goals in the 1993/94 Premier League campaign, the joint-most by a single player within a single Premier League season alongside Alan Shearer in 1994/95. Outstanding. #OptaPLSeasons pic.twitter.com/eIQAjB4oUt