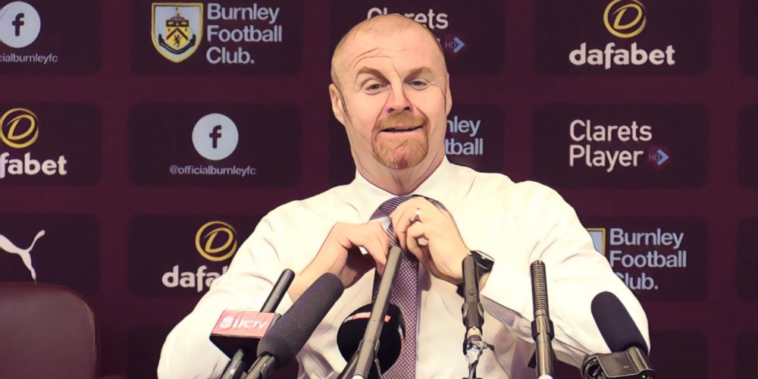 Burnley have parted company with Sean Dyche after almost a decade at Turf Moor, the club’s perilous position in the Premier League’s relegation places having led to change.

Dyche has been one of the division’s great characters throughout his time at Burnley, from his distinct gravelly voice to his meat-and-potato team and unapologetic love of 4-4-2.

The longest-serving manager in the Premier League until his exit, we’ve no doubt Dyche’s talents will find a way back into the division in the near future.

The ‘Ginger Mourinho’ has had his fair share of iconic press conferences throughout the years and in tribute to the departing Dyche, we’ve looked back at some of his most memorable.

Sean Dyche doesn't like phones going off in his press conferences….. pic.twitter.com/LajOBJ1MzK

🗣 "Your doorbell interrupted my press conference, so I want to see who it is!" 😂

It’s fair to say lockdown took its toll on a lot of us, with Dyche turning to alternative methods to break the boredom and keep himself entertained.

Sean Dyche's brilliant press conference set out to break the boredom, just having a chat about how much fun it is to play lookie-likeys when the pubs are open…😂 pic.twitter.com/fdMRM2Zjho

Including his own personal favourite Dyche doppelgänger…

It was Christmas chaos at the @BurnleyOfficial press conference today!

Smoking exhausts and eating gravel, the true secrets behind the dulcet tones of the now former Burnley boss. Who knew?

Sean Dyche is no stranger to an unorthodox @BurnleyOfficial press conference 😂 #BURMCI pic.twitter.com/OrJADsux2z

A frosty response to questioning on his choice of attire after Burnley’s match against Tottenham Hotspur was postponed due to snow, after Dyche was pictured wearing a shirt and a tie with no jacket or a coat.

In truth, you’d expect nothing less.

No frills. No messing. No coat.

🗣 "Look a bit overdressed there Sean?"

Sean 🗣 "Are we really going to make a story out of the fact I had a shirt on? Is that the best we can do today?" 😴

Sean Dyche is not having the press conference being dominated by him wearing just a shirt in the snow pic.twitter.com/Z6H7emBOa8

One of Dyche’s favourites – on a semi-regular basis – was that Lionel Messi was on his way to Burnley, a tongue-in-cheek joke that poked fun at the Clarets’ comparatively minimal spending.

You can just picture the scenes as Messi’s inch-perfect free-kick is planted square on the forehead of Ben Mee.

Burnley stay up. Turf Moor has a new hero.

Sean Dyche on the wind up during his press conference today 😂

"Messi's agent said he was willing to come still, he is going to pay the fee because of the love of playing for Burnley Football Club and the great football we play."