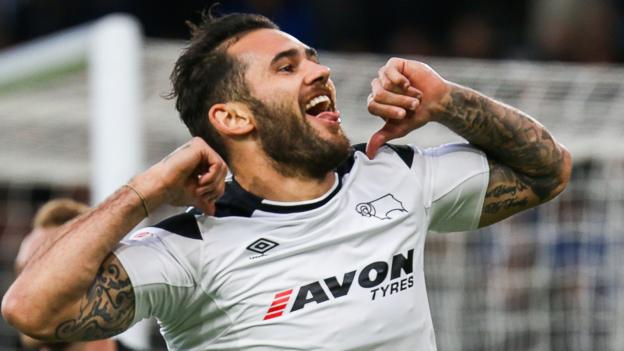 Derby County made it back to back wins and three consecutive clean sheets with a 2-0 victory over Sheffield Wednesday, whose slump continues.

The Owls lost to rock bottom Bolton Wanderers last weekend and were hoping for a much better day out in the East Midlands, but returning defender Glenn Loovens ruined any hope of a positive start for Wednesday when he brought down Matej Vydra for a penalty, and got himself sent off inside the first five minutes.

Vydra scored the resulting spot kick and just like in last week’s victory over rivals, Nottingham Forest, The Rams had an early lead. Tom Lawrence had a chance to double that lead not long after when Gary Rowett’s men caught Sheff Wed on the break, but only the post denied the Welsh international his first Derby goal.

Despite going down to 10 men early on, Carlos Carvahal’s side did see some of the ball, and had a penalty shout of their own when Curtis Davies brought down Gary Hooper.

However, Derby felt that Sheff Wed should’ve been reduced to 9 men when goalkeeper Keiren Westwood appeared to handle the ball outside the box to block Richard Keogh’s effort. Westwood went on to deny Johnny Russell a long range goal later on in the first half.

The second half saw Derby control possession for the majority of the 45 but not do much with it. Ross Wallace and Barry Bannan both tried their luck from distance to equal the tie for Sheff Wed, while Derby substitute Chris Martin forced Westwood into a save with his header.

But the 11 men of Derby were too much for the 10 man Wednesday side, and Johnny Russell cut inside and found Bradley Johnson with a pass, whose turn and finish secured a 2-0 victory for the hosts.

The Rams are now five unbeaten in the league, and have kept three consecutive clean sheets for the first time since December. Sheffield Wednesday now have just one win in their last six league games, and next Saturday face fellow Yorkshire side Barnsley, whilst Derby travel to Norwich.