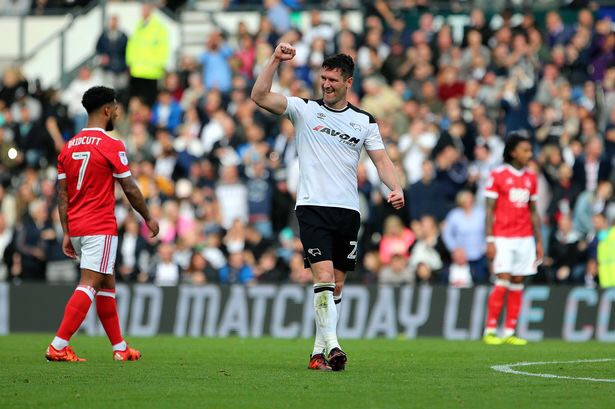 The Rams got off to a dream start, with Matej Vydra hitting the back of the net inside the first minute with what was the quickest goal in the Championship so far this season, just 24 seconds were on the clock when the forward broke the deadlock.

Forest did see a fair bit of the ball however, and by no means was it one-way traffic in the first half, as Mark Warburton’s side forced several corners, but Barrie McKay came closest to levelling for the Reds as he was put through one on one with Scott Carson, who was equal to his shot.

The Rams had their fair share of chances too, Matej Vydra nearly added to his goal tally but saw his shot from inside the box blocked by Eric Lichaj. But Derby had to wait until after half time to double their lead.

David Nugent – who’d received a fair bit of stick from the travelling Forest fans – slotted the ball nicely past Jordan Smith in the Reds goal after a great run and pass from Matej Vydra.

Gary Rowett’s side had chances to build on their lead too, with Tom Lawrence coming close with two separate free kicks. One clipped the top of the crossbar whilst the other was well saved by Jordan Smith.

As the game went, the legs of the Forest team became tired and despite the introduction of Zach Clough and former Derby man, Jamie Ward, Warburton’s men couldn’t find a goal to get themselves back in it, meaning Derby retain the Brian Clough Trophy and pick up a massive three points.

The win means Derby have now won three of the last four meetings between the sides, without a loss in the fixture since November 2015. The Rams also move above their A52 rivals in the league table, and face Sheffield Wednesday at Pride Park Stadium in their next match, whilst up next for Forest is a home tie against Burton Albion.