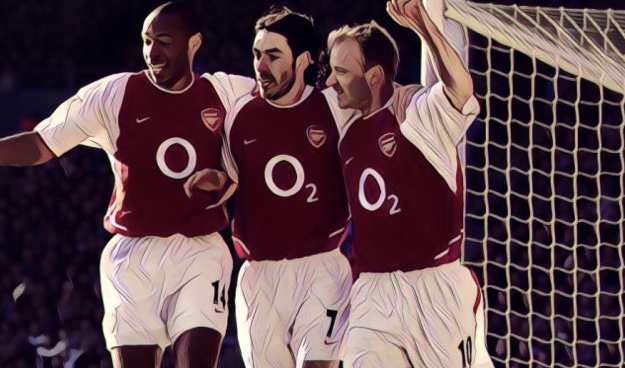 Dennis Bergkamp achieved so much during his 20 year career.

These days such a prodigious talent wouldn’t stay so long at Ajax, but Bergkamp had some of his best days at the Amsterdam club. It was there he won two European trophies, came second for the Balon d’Or award in 1993, and scored over a century of goals.

Bergkamp’s big move to Internazionale turned out to be a bust, scoring 22 goals in two seasons for a side that survived relegation by a single point in 1994. His misery was compounded by missing out on Ajax’s Champions League triumph in 1995, although he did win the UEFA Cup during his time with the Milanese club.

Moving to North London, Bergkamp’s strike rate went down from one goal every two games to one in three and a half, but he proved himself as an Arsenal legend forever more nonetheless.

The Non-Flying Dutchman instantly fell in love with the club the second he saw Arsenal Stadium nestled among the houses in Highbury, describing it as “just typically English.”

It was here that he had the greatest successes of his club career, winning three Premier League titles and four FA Cups while netting 120 goals for the Gunners.

Although the Netherlands legend won two UEFA Cups and the European Cup Winners’ Cup, he will go down as one of the greatest players to have never won the Champions League. When Arsenal finally reached the showpiece match in 2006, he was an unused sub in the final against Barcelona, who earned a 2-1 comeback victory.

Bergkamp retired that season, but he did so having had some incredible achievements.