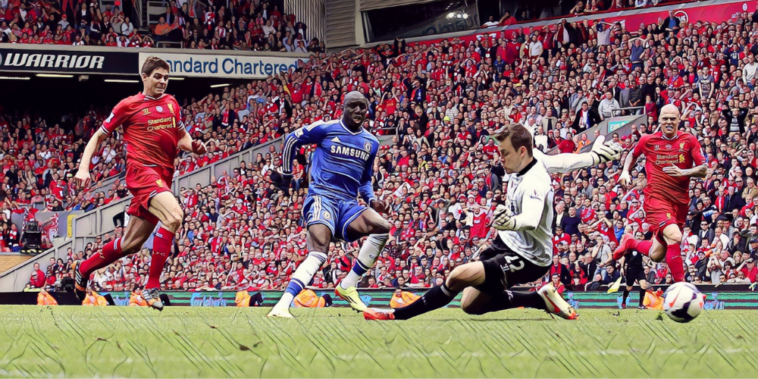 It’s one of the most iconic title race moments in Premier League history, as Demba Ba capitalised on Steven Gerrard’s unfortunate slip to all but end Liverpool’s hopes of being crowned champions.

The 2013/14 season saw Liverpool riding a wave of momentum and optimism, as Brendan Rodgers’ free-scoring side – propelled by the devastating duo of Luis Suarez and Daniel Sturridge – closed in on ending the Reds’ long wait for a top-flight league title.

Liverpool were top of the division and on an 11-game winning streak with just three games of the season remaining, but saw their charge derailed following a home clash against Chelsea at Anfield.

Steven Gerrard – the Reds’ captain and a player who had contributed so much to the club’s modern successes – saw Demba Ba capitalise on his mistake to open the scoring, the midfielder cruelly slipping at a pivotal moment to allow the Senegal international a clear run on goal.

Liverpool were unable to recover as Jose Mourinho’s side held firm to seal a 2-0 win, Willian’s late goal on the break taking the destination of the title out of the Merseysider’s hands.

It proved a season of agonising near miss for eventual runners-up Liverpool, as Manchester City were crowned champions on the final day of the season.