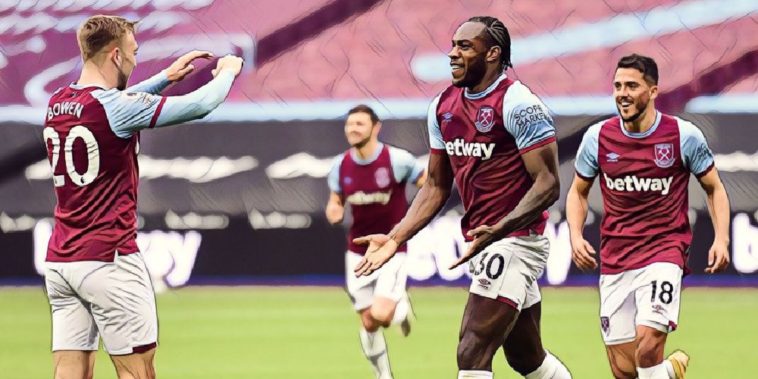 West Ham followed up their dramatic 3-3 result versus Spurs last weekend by grinding out a hard-fought 1-1 draw against Man City at the London Stadium.

Manchester City came into the game as overwhelming favourites, with Pep Guardiola’s record at the London Stadium having read five games, five wins, 22 goals scored and just one conceded in all competitions.

However, it was West Ham who took the lead and they did so in impressive fashion. The Hammers had already shown their hand by trying to swing in a number of crosses into the box, and in the 18th minute, Vladimir Coufal’s cross was directed towards the burly frame of Michail Antonio. The 30-year-old held off defender Ruben Dias, before unleashing an acrobatic overhead kick past Ederson.

A thing of beauty! 🚲😍pic.twitter.com/gW5FdM04Fg

As you would expect, City dominated the ball, but came up against two solid banks of Claret and Blue, the Hammers content to defend the width of the penalty area and try to hit on the break, with City unable to create much of a real chance.

They did come out with more intent in the second half, and six minutes after the break, they were level. Full back Joao Cancelo had looked like a dangerous outlet for the visitors, and the Portuguese got down the left flank before feeding the ball to half time substitute Phil Foden – a replacement for Sergio Aguero – who, in acres of space inside the box, controlled the ball, turned, and despatched past Fabianski from eight yards.

Pep Guardiola was able to introduce Kevin de Bruyne after he had missed City’s last two games, and the Belgian’s introduction saw the Citizens increase the pressure on the Hammers defence.

However, the Etihad outfit were unable to grab a winner despite a number of late chances – particularly for Raheem Sterling, and speaking after the game, West Ham midfielder Declan Rice was impressed with how his side ‘nullified’ their opponents most creative players.

“It’s a great point. We’ve been in fantastic form recently,” he told BT Sport. “The first half was excellent today. We nullified their main players and Antonio scored a great goal. It was about digging in and giving everything for the point.

“They’re a possession-based team. They’ve got so many players to pass to. It doesn’t help when they bring De Bruyne on with 25 minutes to go. The lads stayed switched on, it was brilliant.

“I think the last three or four games against them they’ve scored four or five every time, so it shows we’re building something. We’ve found a formation that suits our players. That’s what West Ham fans expect and that’s what we demand as players.”

Last week, Jose Mourinho likened the impact of Hammers midfielder, Tomas Soucek, to that of Marouane Fellaini under David Moyes back in his Everton days, and Rice admitted he is enjoying playing alongside the Czech international in the middle of the park.