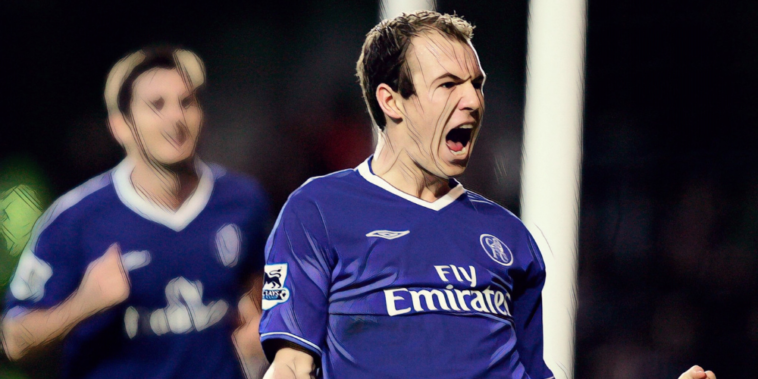 The saga surrounding Frenkie de Jong’s future appears no closer to reaching its conclusion, though Chelsea have reportedly added a twist to the tale after expressing interest in the midfielder.

An approach from west London will spark apprehension at Manchester United, who have spent the summer chasing Erik ten Hag’s number one target with little success.

Chelsea have past history in snaring transfer targets from their Premier League rivals and as the Blues attempt to hijack another deal, we look back at five players who chose a move to Stamford Bridge over Manchester United.

Arjen Robben came close to signing for Manchester United in 2004, with the teenage winger having flown into England for talks with the Red Devils.

All appeared in place for the PSV Eindhoven prospect to join the club and the player’s father went as far as to say that Old Trafford was the ‘only place’ Robben wanted to play.

However, a deal dragged on as United failed to match PSV’s asking price, allowing Chelsea and former chief executive Peter Kenyon to steal in and snare the Dutchman from under their noses.

“I had a very good conversation with him (Ferguson) over dinner in Manchester and we spoke about football and life,” Robben recalled to FourFourTwo.

“I also went and had a good look around the training ground and everything was good, but after I went back to PSV nothing happened.

“There was no real contact and the deal didn’t happen. PSV were also negotiating with Chelsea at that time, so maybe they offered PSV more money? I don’t really know.

“I spoke to Chelsea and I liked their plans. We had one meeting and everything was done pretty quickly. Had Manchester United offered me a deal straight after I met them, I would have signed there, but it didn’t happen and I have got no regrets.”

The most memorable transfer tussle involving Manchester United and Chelsea, the former’s deal for John Obi Mikel was so advanced that the midfielder signed a contact and was unveiled in club colours.

However, in an unforgettable twist the Nigerian teenager, then playing for Norwegian side Lyn Oslo, claimed he was pressured into signing a deal with the Red Devils,

“I signed a contract with Manchester United and I didn’t do that of my own free will,” Mikel exclusively told Sky Sports News at the time.

“I was put under a lot of pressure to do that. I was denied advice from my agent and people I trust and I didn’t get much time to think about that.”

What followed as a bitter legal battle between the sides, with each believing they had reached an agreement over the signing of Mikel.

As United struck a deal with Lyn Oslo, Chelsea had agreed terms with Mikel and his representatives and claimed the club had helped the midfielder move to Europe from Nigeria as a teenager, with Mikel having trialled with both teams two years earlier.

Premier League chief Sir Dave Richards then intervened and reached out to Mikel to arrange a meeting a make a decision on his future.

“He [Richards] offered to help me. He told me it was making enemies between the two big clubs, Mikel told the Manchester Evening News.

“I told him I wanted to play for Chelsea and he said he would help resolve it. Then I had a secret meeting with Mourinho at his house.

“I had these two great managers wanting me and I did not know what to do. Fergie told me: ‘Why would you turn down United? It’s the biggest club in the world.

“You cannot do that. You have to say yes, If it’s money, I can give you what you want’, but it was never about the money. I had Barca waiting to pounce if the legal wrangle couldn’t be sorted, but felt obliged to sign for Chelsea as they’d looked after me.”

After a messy dispute, Chelsea eventually agreed to pay Manchester United £12m for the rights to Mikel, with a further £4m sent to Lyn Oslo.

Eden Hazard was one of European football’s hottest properties in the summer of 2012, with clubs across the continent queuing up to sign the winger from Lille.

Hazard had interest from a number of Premier League clubs with Manchester United, Manchester City, Arsenal and Tottenham all making an approach, before Chelsea won the race to secure his services in a £32m deal.

“I had a chance to sign for Manchester United, Man City, Tottenham, but I made the right decision,” Hazard said, as per the Manchester Evening News. “I spoke with the owner and I had Didier Drogba and Joe Cole on the phone telling me this was the best club.”

The Belgian was named as the PFA Player of the Year after Chelsea’s title success in 2014/15 and scored 110 goals in 352 appearances before joining Real Madrid in 2019.

Chelsea came out on top in another transfer battle with Manchester United in 2015, with the Spain international revealing that the Blues’ greater interest persuaded him to move to Stamford Bridge.

“I had offers from other English clubs – Manchester United, City and Chelsea, who were the club that more rapidly resolved my transfer and the one that showed more interest in me,” he told the Manchester Evening News.

The player’s agent had earlier claimed that the Red Devils’ ‘fell asleep’ during negotiations and allowed Chelsea to make their move.

“It is common knowledge that United were in the bidding for Pedro, but Chelsea were faster and within 24 hours reached an agreement with the club. It was a whirlwind.”

Chelsea activated the £22m release clause in Pedro’s contract at Barcelona and the Spaniard made 206 appearances across five seasons with the club, scoring 43 goals.

N’Golo Kante’s role in Leicester’s shock title win had the Premier League’s elite scrambling for his signature, with both Chelsea and Manchester United expressing an interest in the midfielder.

Jose Mourinho made a call to persuade Kante to move to Manchester, but the Frenchman turned down advances from Old Trafford in favour of a move to Chelsea.

“It was amazing to have Mourinho call me, even though I’d been warned before how he would appeal to me,” he told Sky Sports.

“I listened to his arguments about why I should move to United. But at that time I was hesitant between staying at Leicester or leaving for Chelsea.

“My discussions with them were already well underway. But when I spoke, I had a good feeling with Conte.”

Kante was named as the PFA Player of the Year during a brilliant debut season at Chelsea, in which he helped the Blues to Premier League title success. In the six seasons since he turned down the Red Devils, United have largely failed to address their midfield issues.