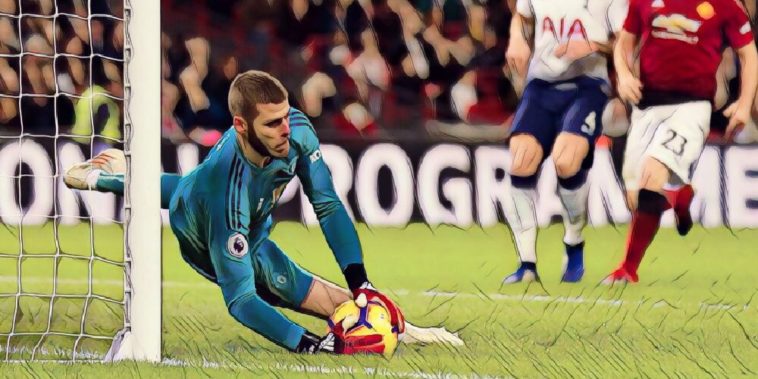 Ole Gunnar Solksjaer made it six wins out of six as Manchester United boss, after an unreal second half display by David De Gea ensured a 1-0 victory over Spurs at Wembley last Sunday.

It’s been a while since we’ve seen the Spanish number 1 in the kind of form he displayed against Spurs. Harry Kane, Dele Alli, Heung-min Son, and even Alderweireld had a go, but De Gea stood firm to deny Spurs a share of the spoils.

De Gea made a season high 11 saves in the second half after Tottenham had failed to hit the target even once in the first 45 minutes.

For the first time since he took over the reins at Old Trafford, we saw Solksjaer show some real tactical nous at Wembley. Spurs lined up in their usual 4-4-2 with a diamond midfield, with Son and Kane up front.

Manchester United chose to sit deep with their midfield and defence, leaving the attacking trident of Lingard, Martial and Rashford to hit on the counter. Whenever Spurs lost the ball high up the pitch, Matic, Herrera and Pogba played early long balls out to the forwards.

This troubled Tottenham more than it should have – and that is a testament to the attacking fluidity that United have attained under their new boss and his coaching staff.

Pochettino took a risk by fielding the experienced Vertonghen, who had just returned from a hamstring injury, over Davinson Sanchez, and Solksjaer duly positioned Rashford along that channel to hit Spurs where they were most vulnerable.

Eventually, an uncharacteristically sloppy pass from Trippier was intercepted by Lingard, and Pogba’s brilliant early ball over the top was controlled and beautifully finished by Rashford from a tight angle.

The goal epitomised how the Red Devils have improved in the course of one month. They look slicker in attack, Pogba’s positional freedom has brought out the best in him, and they are much more lethal in front of goal.

Tottenham’s diamond set-up meant that they controlled the midfield in the first half by congesting it, but in the process, they rarely troubled United’s full backs. To make matters worse, Sissoko was forced off with an injury, and Pochettino threw Lamela on ahead of Oliver Skipp, forcing Alli and Eriksen to take up deeper positions.

The Argentine manager had to make changes in the second half. The simplicity of those changes, and the ease with which Spurs dealt with United’s tactics, was alarming to say the least. In retrospect, this was his audition in front of Sir Alex Ferguson and Ed Woodward, and had it not been for De Gea, Poch would have been the clear front-runner to secure the Old Trafford job in the summer.

It was just a small tweak – Pochettino pushed Lamela and Son wide, and Alli further forward, to convert into something more akin to traditional 4-4-2. Luke Shaw and Ashley Young were regularly occupied.

Perhaps the biggest source of concern was how Spurs repeatedly fashioned clear-cut chances.

Jones was caught out by Kane after a simple pass by Alli. England international Alli was then left free to head the ball across goal by Herrera, Lindelof and Matic. Shaw was caught out by Alli, who found himself one-on-one with De Gea. Alderweireld shook Lindelof free with embarrassing ease from a corner.

Any of those chances could have been an equaliser, and probably would have been one with someone other than De Gea in goal. This is the crux of the problem – while Solksjaer has produced noticeable improvements all over the pitch, the only area he seems to have permanently fixed is the attack.

This is in no way an indictment of the Norwegian – his achievements in the span of four weeks have been nothing short of incredible. It just shows that United cannot possibly hope to challenge for the Premier League title in the near future with the squad they currently have.

They still lack a commanding voice at the back. You look at their current crop of centre backs – Lindelof, Bailly, Rojo, Jones, Smalling – none of them are leaders in the mould of a Vidic or a Ferdinand, or in the here and now Liverpool’s imperious Van Dijk.

Koulibaly would be ideal, but £100 million for a defender might be too much even for the Red Devils. One thing is for sure though – they need to sign a leader at the back by next summer at the latest.

Herrera and Matic were also technically outclassed in midfield. Both of them have improved tremendously in defence, but their inability to hold and maneuver the ball around an opposition midfield was apparent yesterday (although Herrera showed some great footwork towards the end).

Which brings us to the next priority – a technically sound holding midfielder. Matic is in his thirties, and Herrera’s contract runs out soon. It’s not really a position that has been of concern lately, largely because United’s midfield found it easy to deal with opposition of a lower calibre so far. But Spurs showed clearly how a truly world class set of midfielders could hurt them.

One thing’s for sure though – United are on the right path. Solksjaer has Old Trafford buzzing, and for good reason. If he can bring about improvements in defence and midfield, a top four spot would be a very reasonable target at the end of the season.