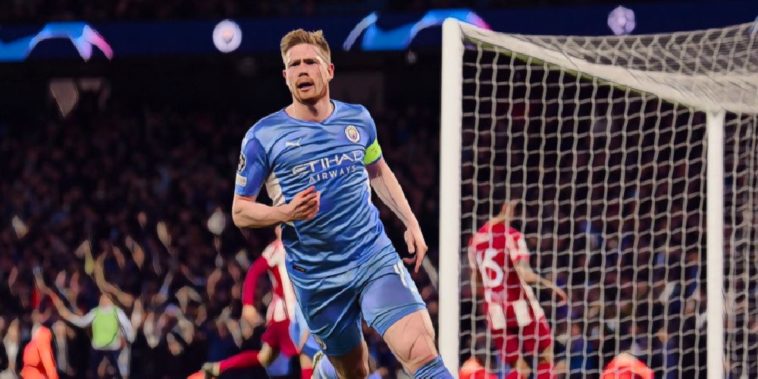 Manchester City produced a thoroughly dominant performance as they earned a slender 1-0 advantage in their Champions League quarter-final first leg against Atletico Madrid at the Etihad.

Atletico Madrid have tasted plenty of experience against English sides so far this season, having faced Liverpool twice in the group stages, before dumping Manchester United out of the round of 16.

It was a meeting between two managers famed for their wildly contrasting styles of play, and unsurprisingly it was Pep Guardiola’s side that enjoyed the vast majority of possession right from the off, as Diego Simeone’s men sat back, kept it tight and looked to hit on the break.

City ended the first half having had 73% of the ball, but had failed to test Jan Oblak between the sticks, and they continued their dominance into the second half.

It eventually paid dividends in the 70th minute, some lovely footwork from substitute Phil Foden seeing him get the better of Reinaldo as he slipped it into Kevin de Bruyne who found a yard of space in behind the Atletico defence and the Belgian made no mistake with his finish underneath Oblak.

De Bruyne’s strike was one of only two shots of goal for the Citizens, while Atletico didn’t register a single attempt in what was a tight tactical battle, and speaking after the game, the Belgian outlined the difficulties in playing against Simeone’s welk-drilled, tightly packed side.

“The first half was tight in the second half we had a couple of chances and it was good that we took one,” he told BT Sport.

“I made the run and Phil [Foden] found me perfectly, I needed to stay composed and luckily I did. It’s very hard. They played with almost five at the back and with five in midfield. I recommend anyone that says anything [about us], that they try playing against that on the training ground.”

“We have to stay composed and don’t try to get into their action. It is the way they play. 1-0 is 1-0. I expect similar over there. If the game is tight they will have to attack a little bit more.”

Asked if he enjoyed his side’s performance, manager Pep Guardiola said: “A lot. We played an incredible top side who are difficult to face but it is a good result. We had chances to score a second and third.

“The guys were playing well but with Gabriel [Jesus] coming inside it gives us special energy and with Jack [Grealish] to keep the ball.”

Foden’s decisive assist came just 80 seconds after his introductions, and Guardiola said: “When we make a sub it is because we think it can be a bit better. It works sometimes but other times it doesn’t.

“It is not easy to face a team with a lot of experience in this tournament. We will go there to score and try and win again.”

Next up for City is a potentially decisive fixture in the Premier League title race when they host second placed Liverpool at the weekend.