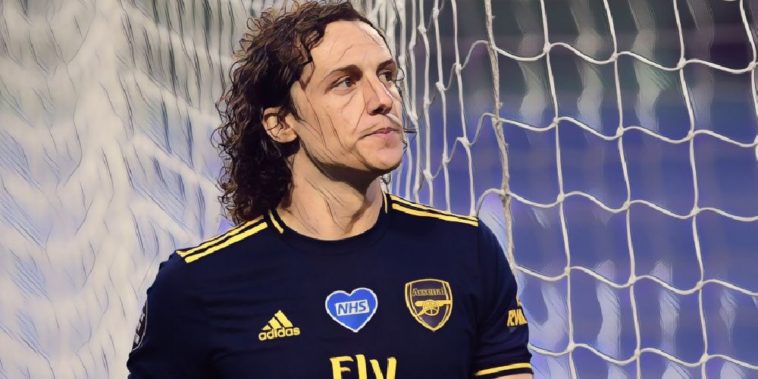 Mikel Arteta’s return to the Etihad was not a happy one, with his former employers Manchester City running out 3-0 winners on a rain-sodden night in the North West.

Playing their game in hand, Arsenal knew that a victory against Man City would lift them to within five points of fourth-placed Chelsea, and just two points behind fifth-placed Manchester United, a position which could offer Champions League football should City be unable to overturn their European ban next month.

The Gunners started the game brightly in what was a fairly even encounter across the opening exchanges, though Mikel Arteta’s pre-match planning was quickly in tatters, Granit Xhaka and Pablo Mari succumbing to early injuries.

Mari’s injury would prove the more significant, with the ever error-strewn David Luiz coming on to replace the Spaniard, only to be culpable for Man City’s first two goals.

The Brazilian failed to deal with a Kevin de Bruyne ball on the stroke of half-time, the ball coming off the defender’s thigh straight into the path of Raheem Sterling, who duly smashed the ball past Bernd Leno for his first goal of 2020.

Four minutes into the second half, and Luiz’s evening was over, the defender clumsily hauling down Riyad Mahrez in the box, leaving referee Antony Taylor with no option but to award a penalty and issue the 33-year-old with a red card.

2015 – David Luiz is the first player to be sent off, concede a penalty and commit an error leading to an opposition goal in a Premier League match since Carl Jenkinson for West Ham vs Bournemouth in August 2015. Hat-Trick. #MCIARS pic.twitter.com/zpLK6yDfxm

Despite Luiz’s mistakes, however, City were superior all over the park and fully deserving of the victory, and they scored a third in second-half stoppage time, Phil Foden tucking home after Sergio Aguero had hit the post.

Speaking about his first return to face his former employers, Mikel Arteta is hopeful that all of Arsenal’s bad luck is now behind them ahead of their final nine league games and a potential FA Cup run.

“Everything went wrong from the first minute when Granit got injured and we had to change the plan a little bit,” Arteta told Sky Sports. “But every possible accident that could have happened hopefully happened today, and not in the rest of the 10 games we have ahead of us.”

Despite the hefty defeat, the 38-year-old was still able to find positives.

“The spirit that the boys showed, not to stop when everything goes against you,” he said. “We had our moments in the first half, two good chances, we had three or four good breaks where we could have hurt them, and just before half time we conceded a goal that we gave them basically.”

Asked about David Luiz’s night to forget, Arteta added: “He spoke in the dressing room. David is someone who is very honest and straight forward, I’m sure he will talk to you guys and explain his feelings, but my opinion of David does not change from the moment I joined. What he has done for the team, what he has done for me, he won’t change just because he had a difficult performance tonight.”

The Brazilian is out of contract at the end of the month, though Arsenal do have the option to extend it by a further 12 months, and Arteta said that his showing tonight won’t change his decision on his future at the club, whatever that may be: “It won’t change a thing,” he insisted. “Whatever we are going to do, or we did before today’s game, we will keep internally.”

Arteta opted to leave Mesut Ozil out of the expanded 20 man squad for the trip to Manchester, and the Arsenal boss admitted the exclusion of the club’s highest earner was “for tactical reasons”.

Arteta urges Arsenal not to ‘stand still‘ or risk falling further behind, with club under ‘enormous’ financial pressure