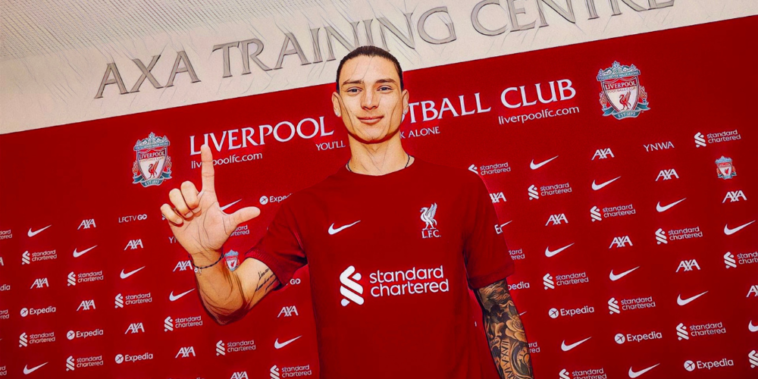 After a title race which went down to the wire once again, the Premier League’s top two have wasted no time in sending out statements of intent ahead of the new campaign.

Manchester City were first to make their move, securing a deal for the most coveted talent in world football. Erling Haaland had been courted across Europe and is arguably the first instance of a world superstar choosing the Premier League as their destination of choice, with his peak years still to come.

Haaland’s arrival will make the defending champions an even more intimidating force, though the modern sparring partners of City’s championship machine have issued their own response.

Darwin Nunez has signed for Liverpool in a deal which could reach a club record £85m, with the forward having turned heads at Benfica.

The 22-year-old’s output exploded across his second season in Portugal, scoring 34 goals including a goal in each leg of Benfica’s Champions League exit to his new side.

Having taken a strategic route into European football, leaving Uruguay for Spain’s Segunda Division before moving to Benfica, Nunez has been allowed to develop away from the limelight of a top five league.

After starring during this season’s Champions League campaign, the recruitment staff at Liverpool – a team which has not often faltered when spending big – decided Nunez justified a potentially record-breaking outlay.

The intriguing aspect of Nunez’s arrival, and indeed of that of Haaland, is the addition of a differing profile to the Premier League’s dominant forces.

Neither Liverpool or Manchester City have operated with what would be regarded as a traditional number nine in recent campaigns, but now possess two of the rising centre-forwards in European football.

Liverpool’s modern success has been built on the free-scoring triumvirate of Mohamed Salah, Sadio Mane and Roberto Firmino, with the latter’s role to drop deep and create spaces for Salah and Mane to rush into from wide roles.

Nunez – whilst of a different physical profile to both Salah and Mane – is another footballer whose best work has often come when driving into space.

His 1.8 take-ons completed per 90 minutes last season was superior to Mane, Diogo Jota and Firmino, the three stars who most often occupied the central role in Klopp’s system. It is a number that matches that of Salah, demonstrating his willingness and confidence to run at opposition defenders.

Nunez has featured both centrally and from the left for Benfica and that fluidity will please Klopp, though it is perhaps his differences to the Reds current options that have most attracted the Liverpool boss.

Klopp in particular was impressed with the South American’s strength when witnessing Nunez first hand in last season’s Champions League, as the forward tested Ibrahima Konate and Virgil van Dijk with his frame and direct runs.

The German was gushing again after unveiling Nunez as Liverpool’s latest signing, referencing once more the power the Uruguayan can provide.

“Darwin is a wonderful player – already really good but so much potential to get even better,” Klopp told the club’s official website.

“That’s why it’s so exciting, to be honest. His age, his desire, his hunger to be even better than he currently is. His belief in our project and what we are looking to do as a club.

“He is as excited by us as we are by him, which makes for a great relationship, when you appreciate each other’s strengths. That is certainly the case here. He thinks we suit him and we believe he is the right fit for us – so let’s do it.

“He has all the pieces we look for. He can set a tempo, he brings energy, he can threaten space from central and wide areas. He is aggressive and dynamic with his movement. He plays without fear, he’s powerful. I know he will excite our supporters.”

Nunez for all his attributes, however, will be judged on goals. He scored 34 times from 41 appearances for Benfica last season, averaging better than a goal-per-start to finish as the Primeira Liga’s leading scorer.

Statistically, the numbers made for fine reading. Nunez’s shot accuracy of 62.32% was higher than each Liverpool’s current forwards, whilst a conversion rate of 37.28% far exceeded his new teammates at Anfield. The Premier League will no doubt pose a more difficult proposition, but there is reason for Reds to be excited.

Klopp has already called for patience with the new arrival despite the weight of expectation that comes alongside a potentially record-breaking price-tag. Integral members of his side in Andy Robertson and Fabinho were given lengthy adaptation periods and it remains to be seen how soon Nunez becomes an automatic selection.

There are areas of his game that need improvement. Regaining and retaining possession are hallmarks of Liverpool’s front line and Nunez’s numbers will need to markedly improve to fit into Klopp’s system.

Darwin Núñez: “It’s a pleasure to be here in Liverpool and I’m very happy to be a part of this great club – here they suit my style of play”. 🔴🇺🇾 #LFC

“I’m here because I want to win many trophies with Liverpool – that’s why I wanted to join this club. It’s massive”. pic.twitter.com/Ezm9hkQ7Ok

His 2.4 ball recoveries per 90 minutes is lower than each of Salah, Mane, Jota, Firmino, whilst his pass accuracy also ranks below that quartet. It is perhaps reason why Klopp has called his latest addition a ‘work in progress’.

The progress so far however, has been positive and in Nunez the Reds having signed a forward who is both raw and exciting in equal measure. The prospect of a Liverpool forward line without Salah, Mane and Firmino once seemed unthinkable, but there is optimism at Anfield ahead of the next developmental stage of Klopp’s side.

To keep pace with Manchester City, evolution was essential. Nunez looks set to be at the heart of Anfield’s own Darwinism.

Read – Nunez: ‘I want to win a lot of trophies at Liverpool’