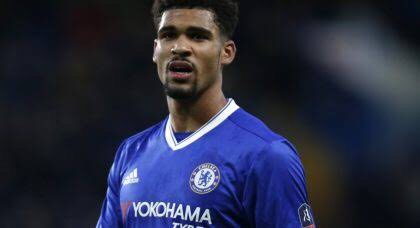 Crystal Palace have seemingly won the race to sign Ruben Loftus-Cheek from Chelsea on a season long loan.

Yesterday, the Daily Telegraph claimed that the Chelsea midfielder was close to becoming the first signing of the Frank de Boer era at Crystal Palace and reports today suggest the deal is very close to being completed.

Loftus-Cheek showed a lot of potential with the Premier League champions, making 17 appearances in all competitions for the club during the 2015/16 campaign, and was seemingly fancied by Jose Mourinho.

He has been tracked by Southampton as well as Premier League newcomers Brighton and Newcastle, but it seems as though the South London club have won the race for his signature.

Sky Sports and TalkSport presented Jim White tweeted this morning that the player is having a medical with the Eagles before completing the loan move to Selhurst Park.

Ruben Loftus-Cheek to have a medical @CPFC ahead of season long loan deal.

Palace fans, will Loftus-Cheek be a regular starter for you? What other business do you need to do this summer. Let us know.