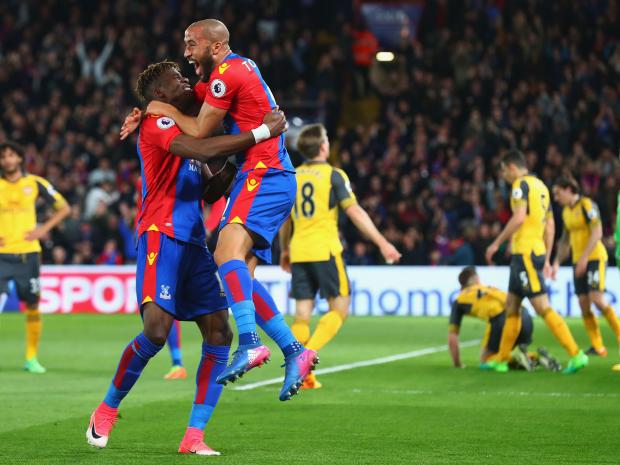 Both teams were unchanged from their midweek matches against Southampton and West Ham respectively.

Crystal Palace started the game brightly. Jason Puncheon played the ball into the path of Christian Benteke who was wiped out by Shkodran Mustafi. The advantage was played but Luka Milivojevic’s shot from outside the box was wide.

Andros Townsend played a one-two with Yohan Cabaye who then passed to Wilfred Zaha. The Ivorian midfielder slipped as he put a cross in, Townsend got on the end of it to thump home and give Palace the lead.

Despite having the lion’s share of possession, Arsenal were unable to make it count. Alexis Sanchez had chances to level the scoring but one shot was saved by Hennessey and the other curled wide. Palace continued to push forward and Benteke was through on goal but Emiliano Martinez was on hand to push the shot wide at his near post.

Just before half-time, Gabriel got on the end of Granit Xhaka’s corner but his header from distance was saved comfortably by Hennessey.

Palace came out all guns blazing in the second half while Arsenal, once again, struggled to dominate. Zaha slipped again but provided another assist as Cabaye met his cross and his spectacular effort went high over Martinez and into the net.

Just five minutes later, things went from bad to worse for the Gunners. Martinez brought down Townsend in the box and conceded a penalty. Luka Milivojevic took the penalty, a powerful strike low into the corner, which Martinez had no chance of saving, scoring his first goal for the club.

“Arsene Wenger, we want you to stay”

Crystal Palace were the latest set of fans chanting “Arsene Wenger, we want you to stay”. With performances like that from Arsenal, would can blame them?

The Gunners were desperate for the final whistle to come. Hector Bellerin put in countless crosses as the match drew to a close but his team-mates were nowhere to be seen. Arsenal did not have a single shot on target in the second half.

Arsenal have won just one of their last five league matches. This defeat equaled a club Premier League record of four consecutive away defeats in the process. They are now also seven points behind fourth-placed Manchester City in the race for Champions League qualification.

Wenger and his men can make no excuses for this sort of performance. They were second best from the first minute and never made any attempt to take control of the game. Crystal Palace wanted the three points more and they worked for 90 minutes to get their reward.