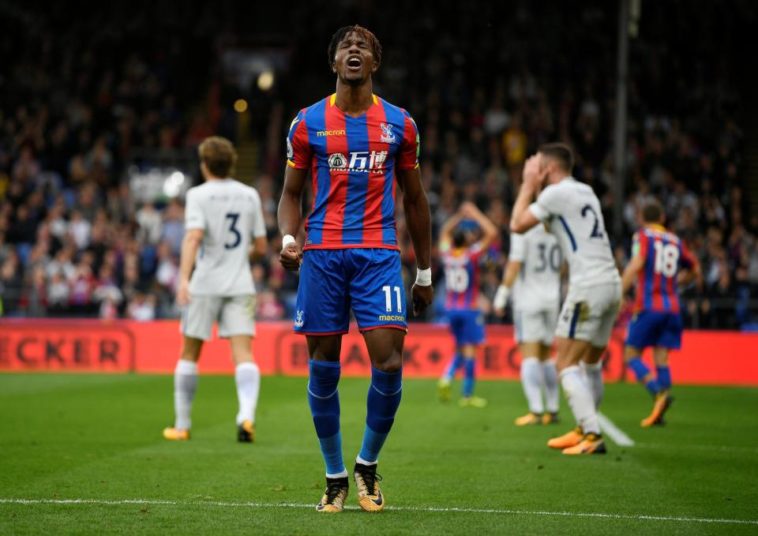 Wilfried Zaha and Andros Townsend combine to precisely slice through the Chelsea defence in a 2-1 upset victory for Crystal Palace on Saturday.

Zaha made his first appearance since the season opener, and scored the winning goal in Palace’s first win of the season after seven games without a goal or a point.

Roy Hodgson’s game plan for his south London side was to quickly get the ball to Zaha and Townsend running down the channels, and it was that fast-paced attack that left Chelsea on their heels as they scrambled to set up into defensive formations.

Townsend got through on the right flank in the 10th minute, and crossed the ball to Yohan Cabaye who kneed it into César Azpilicueta who was credited for the own goal. It was Crystal Palace’s first goal of the season.

Chelsea responded in the 18th minute from a corner. Mamadou Sakho failed to mark Tiémoué Bakayoko who headed the ball past Julián Speroni to even the match at 1-1.

As the game approached half time, Sakho won the ball off of Willian deep in the Chelsea half and quickly passed it to Zaha. Azpilicueta gave too much space for the Ivorian to put the ball on his stronger right foot to slot it past Thibaut Courtois for what turned out to be the game-winning goal.

There was a clear contrast between both attacks. Crystal Palace were quick into getting the ball to their playmakers before Chelsea could react. The Blues took too long to try to find the right pass, and there was eventually no space for Eden Hazard to make a play, or for Michy Batshuayi to even be involved. He only had five touches of the ball after 25 minutes.

Chelsea did breathe some life into their attack after some substitutions. Batshuayi was taken off in the 56th minute for Pedro, a move that upset the Belgian forward.

However, the attack didn’t wake up until Charly Musonda Jr. replaced Willian in the 66th minute. Fresh off his rant about playing time on Instagram, Musonda took his chance to prove he deserved more looks in Antonio Conte’s lineup. He chested a lob pass from Cesc Fàbregas in the 72nd minute, and volleyed the ball over the bar, but it was the start of some Chelsea pressure.

Davide Zappacosta, who had replaced Victor Moses in the 40th minute after the latter pulled up with a hamstring injury, was also heavily involved in the Chelsea attack. The Italian put in cross after cross into the box, but was unable to find a target with Crystal Palace defending well.

Crystal Palace closed out the game by bringing on Jason Puncheon, Timothy Fosu-Mensah, and Jaïro Riedewald to bring more energy into a tiring side. They survived in the end, even after Sakho tried to do a backheel clearance in his own box, hitting Musonda and giving Fàbregas a shot on goal, albeit at a very tight angle that caused the shot to go across the box.

Chelsea stay in fourth, only helped by Arsenal’s late defeat to the hands of Watford. Chelsea also play against Watford next Saturday at Stamford Bridge.

Crystal Palace are still at the bottom of the table, but finally put some points on the board. They look to prove their win wasn’t a fluke with a match against Newcastle at St. James’ Park on Saturday.

Man of the Match: Wilfried Zaha