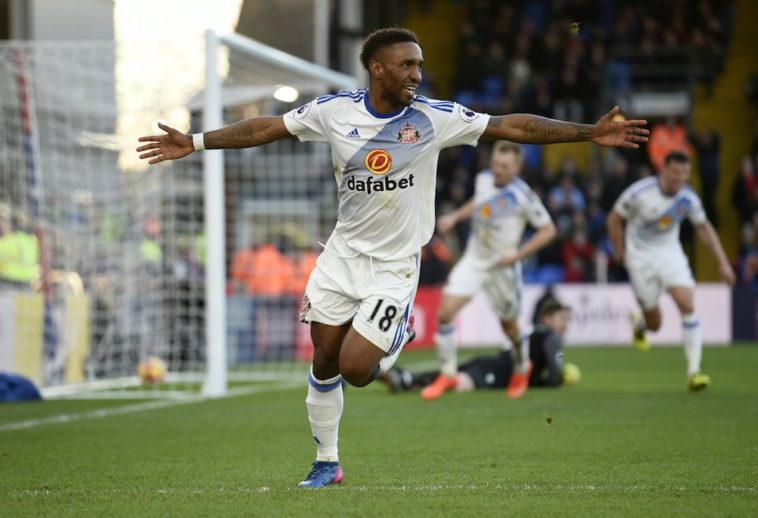 Crystal Palace fell to their heaviest defeat this season as Sunderland ran riot at Selhurst Park, smashing the host for four!

Four first half goals from Lamine Kone, Didier Ndong and a brace from Jermain Defoe gave the Black Cats three vital Premier League points to take them level on points with their relegation rivals.

Kone opened the scoring within the first 10 minutes as he reacted first after Wayne Hennessey’s spilt catch was lashed in.

Despite the early goal, Palace then looked to dominate proceeding’s. Wilfried Zaha having freedom down the right hand side and finding Christian Benteke on numerous occassions.

Sunderland then went on to score three goals in quick succession before half time. The first coming as midfielder Didier Ndong struck a fine shot from 25 yards out which beat Hennessey. Ndong dispossessed first half substitute Joe Ledley easily in midfield, striding forward before curling a great shot off the inside of the right post.

On loan Manchester United winger Adnan Januzaj the provided a perfectly weighted pass for Defoe who put the ball into the far corner to make it 3-0. Shortly after it was 4-0. Januzaj once again provided another assist for Defoe’s second. An accurate through ball from deep found Defoe in the penalty area where he turned James Tomkin’s to fire in his second goal.

Things seem to turn quite nasty at Selhurst Park at the end of the first half. Chants of “you’re not fit to wear the shirt” and boo’s rang around the ground. It culminated in one fan entering the field of play and squaring up to Palace defender Damien Delaney. Stewards and police quickly intercepted the supporter who was escorted away.

After the drama’s during half time Delaney did not reappear for the second half, being replaced by Andros Townsend.

Palace dominated the second half, having the majority of possession and reducing the Black Cats to nothing but a few shots. However, none of pressure paid off. Benteke, Loic Remy and Zaha again had good chances but failed to convert. the best opportunity fell to Sunderland’s Sebastian Larsson whose fizzed shot went inches wide of Hennessey’s left post.

The match ended again with boo’s filling the ground, except for the small corner of ecstatic away fans. Again, stewards and security had to prevent home fans from reaching the players in sour scenes again.

Man of the Match: Lamine Kone

Despite Jermaine Defoe scoring twice, Kone takes my Man of the Match award. The defender opened the scoring with a well taken goal, and backed it up with a very impressive display at the back, helping Sunderland to their second clean sheet in a row.