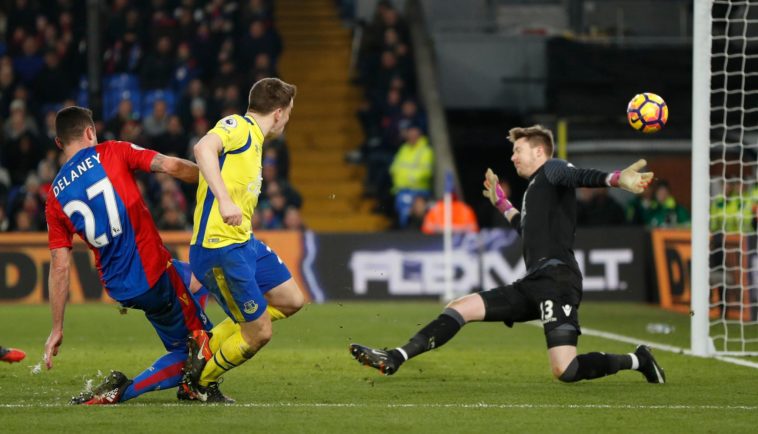 A tight game at Selhurst Park saw Everton take the points as Seamus Colemans strike was the difference between the sides.

Coming off the back of one of the upsets of the season Ronald Koeman’s Everton aimed to get 3 back to back wins in the Premier League against a Crystal Palace side still transitioning to the management of Sam Allardyce. The Blues aimed to get their season back on track after the new year and will try their best to mount an attack on the top 6. Even before the game it was very evident that Koeman’s side would have the majority of possession with Palace happy to sit back and wait for the opportunity to counter.

Ronald Koeman named an unchanged side from the one who trounced City last week, and once again decided to leave the new £20m man Morgan Schneiderlin on the bench. From the off, the game began exactly as predicted with Everton having the most of the possession and Palace sitting back waiting for the counter attack. The first half was a largely one sided affair to begin with and if not for Palace’s goalkeeper Wayne Hennessey being in inspired form, it could’ve been 2-0 or 3-0 going into half time. The Toffees had numerous shots on target on Hennessey including attempts from Kevin Mirallas and Ramiro Funes Mori which the goalkeeper made fantastic saves to prevent.

Palace began to get into the game more as the half progressed and perhaps by the end of the half both managers will have been wanting their teams back in the dressing rooms. As the second half began, it was once again all Everton. The blues returned from the break strongly and pegged Crystal Palace firmly in their own half for the first 10 minutes or so. As was the change against Manchester City, Gareth Barry was replaced by Morgan Schneiderlin around the 60 minute mark with the away fans bursting out in song for their new signing. It’s only a matter of time before Schneiderlin is fit to start and really as he says himself “make his mark on the club”.

However, Palace managed to take the sting out of the game, restricting Everton to only a few chances that would ultimately not really threaten them too much.  Ronald Koeman could see this from the sidelines and he made the brave and bold move to bring other new boy, 19 year old Ademola Lookman on for his second appearance. The youngster replaced the tiring Kevin Mirallas with around 20 minutes to make an impact on the game. He almost managed it with one of his first touches, creating a chance with some good play from Romelu Lukaku but unfortunately for Everton it lead to nothing.

Palace only began to look somewhat threatening in the 79th minute, their first effort on target being saved wonderfully by Joel Robles. The Spaniard has firmly cemented his place in the team over Maarten Stekelenburg in recent weeks. The nerves started creeping in for Everton fans now who’ve too many times seen their team throw away a game late on. However it came to be that it was quite the opposite this time around. Youngster Tom Davies wonderfully executed a pass to Seamus Coleman in the 87th minute, who secured the win for Everton. Despite the defending by Palace all game it was one shot too many with Coleman blazing the ball past Hennessey for the Everton goal.

Ultimately it was a much deserved win for Everton and a very important one too. Not only have Everton gained another two points in their race to catch Manchester United, but on rivals Liverpool too. The red side of Merseyside was left stunned by bottom club Swansea earlier in the day. Everton are now only 9 points behind third placed Liverpool. It breathes a new light onto the success of the season, and despite it being highly unlikely that they catch up, it provides the players and fans hope. It is not beyond the realm of possibility, especially if they keep up this new found form since the new year.

With Everton not having a game for the rest of January it will give Koeman and his players a rest period whilst also allowing the manager to find new players that will improve the team and also allow him to ship out the deadwood who are simply taking up space on the squad registration such as Darron Gibson who’s yet to feature as well as Arouna Kone and Bryan Oviedo who simply are not good enough for this current manager and squad’s ambitions for the future.