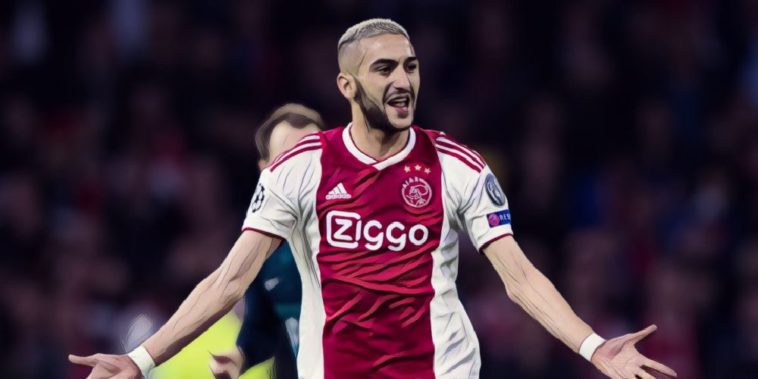 Peter Crouch has backed Hakim Ziyech to ‘light the Premier League up’ when the Ajax star makes his highly anticipated move to Chelsea this summer.

The Moroccan international is set to arrive at Stamford Bridge this summer after Chelsea agreed a deal to sign the attacking midfielder in February, with the 27-year-old becoming the first signing of Frank Lampard’s reign as Blues’ boss.

Ziyech has established himself as one of the best creative talents outside of Europe’s leading leagues in recent years, playing an influential role in the Ajax side which reached the semi-finals of the Champions League last season.

Crouch is relishing the prospect of seeing Ziyech’s talents on a weekly basis after being impressed by the star’s performances in recent seasons, and believes the Blues attacking players should be licking their lips at the prospect of playing alongside their new teammate when he arrives in the Premier League.

“I think he can light the Premier League up, I really do,” Crouch told BT Sport. “I love watching him, the majority of it is his influence in matches is what I love.

“He was part of such a young, vibrant Ajax side, but he’s going to a similar side at Chelsea. That’s what Frank Lampard wants at Chelsea, he wants young players.

“I know he’s not as young as he once was, he’s 27 now, but he was part of that side. He’s got a fantastic left foot, tremendous ability on the ball. When he drops deep he can pick a pass.

“We don’t know the situation with Pedro and Willian, they might move on. I think he will slip straight into that [spot] and become a huge asset for Chelsea, he can be a huge player for them next season.

“They lost Eden Hazard, one of the world’s greatest players and he got Chelsea fans off their feet. He was exciting to watch, he carried so much of the burden for Chelsea.

“I’m not saying [Ziyech] will hit the ground running and be a replacement for Eden Hazard, but I do think he’s got the ability to be something close to that.

“I think he’s got tremendous ability, he’s exciting, and he’ll be an asset to the Premier League.

“He’ll help players, the likes of Mason Mount, Tammy Abraham. If I was Tammy Abraham, I’d be licking my lips at some of the assists this man can provide.”

Chelsea in ‘talks’ with Barcelona over Coutinho transfer