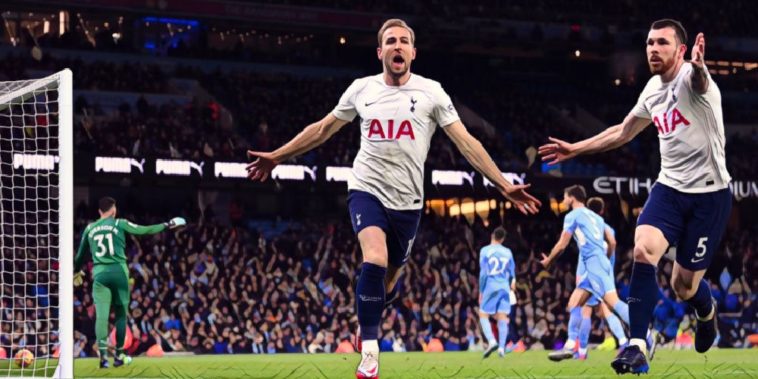 Tottenham grabbed a huge 3-2 victory over Manchester City at the Etihad to bolster their top four hopes and blow the title race open.

Spurs came into the game having lost their last three Premier League matches to see them seven points adrift of the top four places, with Antonio Conte having said this week suggested that his side only have a 1% chance of qualifying for the Champions League.

However, they would upset the form book as they went ahead in just the fourth minute. Harry Kane dropped in deep to receive the ball, before playing a sweeping first-time pass round the corner to find Heung Min Son who raced in behind the City defence. Bearing down on goal, the South Korean unselfishly squared the ball to January signing Dejan Kulusevski, who rolled the ball into an empty net for his first goal for the club.

City would quickly regain control of possession, and would go close on a number of occasions as they looked to draw level. In the 34th minute, a delicious ball from the left from the in-form Raheem Sterling would be dealt with poorly by Hugo Lloris, the Frenchman spilling the ball into the path of Ilkay Gundogan who punished the ‘keeper’s mistake as he fired the rebound home to level the scores.

The Blues continued to boss possession after the interval as they looked to find a go-ahead goal, but would be stunned just before the hour mark as Spurs regained the lead.

The tireless Heung Min Son arced a ball in from the left to find the darting run Harry Kane who found himself unmarked inside the area as he fired past Ederson with a first-time finish.

Kane – who was strongly courted by Manchester City last summer – thought he had netted a second 15 minutes later after he finished off Kulusevski’s rebounded effort, only for it to be ruled out by VAR for a marginal offside by the Swedish international in the buildup.

Having been handed a reprieve, City continued to push forward, and as the game ticked towards the 90th minute, there would be huge penalty appeals from those of a Sky Blue persuasion. Bernardo Silva’s cross from the left was blocked by the raised arm of Cristian Romero, and after a lengthy wait, they would finally be awarded the penalty they had appealed for. Riyad Mahrez stepped up and thundered home an unstoppable strike into the top corner.

However, that wasn’t the end of the drama, as Tottenham incredibly went ahead again in the fifth minute of added time. Spurs again found Kulusevski on the right, and this time he managed to keep himself onside. The 21-year-old sent a cross towards Kane, the striker outjumping compatriot Kyle Walker to grab all three points and blow the title race wide open.

Speaking after the game, Kane admitted that Spurs need to be ‘more consistent’ if they are to challenge for the top four, but was understandably delighted with their work rate to beat the league leaders.

“It was a crazy game,” he told Sky Sports. “We worked so hard for so long. We were 2-1 ahead for such a long time in the second half. To see the penalty awarded was so heartbreaking, but credit to the boys for creating another chance at the end.

“For me it was [about ending] three losses in a row and we had to find a way of getting our season back on track. To get the result we did was really, really special. The boys worked their socks off today. To get the goals was obviously nice. We were great from Hugo all the way through.

“We have high standards of ourselves and we’ve got ourselves in a position where we can really fight for the top four. Football’s about bouncing back. We can’t get too high or too low. The performance today show’s we’re fighting to the end. Hopefully we can use it as momentum going forward.

“We probably have to learn how to be more consistent in a long season. To be in the top four, it has to be on a consistent basis. We’ve got Burnley in midweek – they’re fighting for their lives so we know it’ll be a tough one.”

Asked about his understanding with Son, he added: “We had a lot of preparation obviously. We connect really well and have a great understanding off the pitch. I can’t wait to watch it back in the video room tomorrow.”