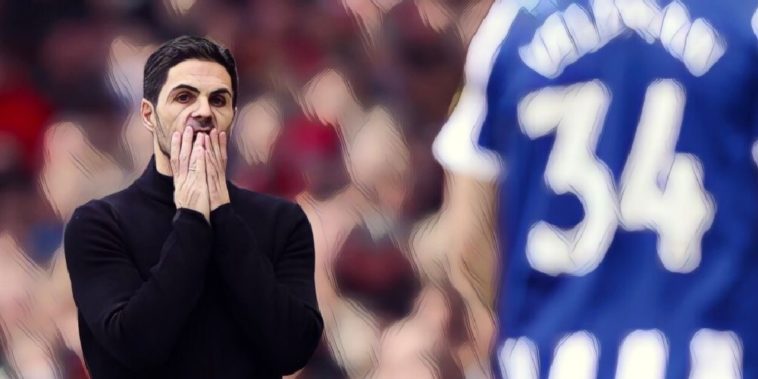 Arsenal’s top four hopes were dealt another blow after they suffered a second successive defeat, losing 2-1 to Brighton at the Emirates.

The Gunners had lost 3-0 against Crystal Palace on their last outing, and they didn’t really come out of the traps in the early stages of this one and struggled to make too much of an impression on proceedings, with their attacking play looking somewhat disjointed.

Just before the half-hour mark, the visitors would take the lead, Enock Mwepu cutting the ball back from the right, picking out the unmarked Leandro Trossard who expertly fired into the top right corner.

Arsenal fans did think they had an equaliser on the stroke of half-time, but a lengthy VAR check eventually ruled Gabriel Martinelli’s effort out for a tight offside.

Brighton came into the game without a win in seven, but doubled their advantage in the 66th minute, Moises Caicedo pulling the ball back from the byline on the left, with Mwepo meeting the ball perfectly on the half volley with his strike crashing past Aaron Ramsdale from the edge of the box.

The Gunners did create a number of chances at the end, and with a minute of normal time to play, Martin Odegaard took aim from more than 30 yards, his effort taking a wicked deflection off former Arsenal forward Danny Welbeck and looping over Robert Sanchez.

Arsenal threw everything at the Seagulls during the six added minutes, but were unable to find a way through, and speaking after the game, Mikel Arteta said his side were sloppy, imprecise, and had ‘no purpose’ to their attack.

“It has been a tough week; especially today because we wanted a reaction [to the defeat at Crystal Palace],” he told BBC Sport. “It came in the second half, which is too late; we have to have the courage and personality to play much better and raise the level in the first half.

“We made it really difficult for ourselves. We were sloppy, we had no purpose to attack, we were really imprecise and we didn’t want to play forward.

“We’ve shown for many weeks how well we can play; it has been a difficult week and we’ve lost some big players, but if you get what you want, not everything is going to be with a blue sky. This is our team in the good moments and especially the defeats.

“There are many games to play but we have to be concerned about that performance, especially first half.”