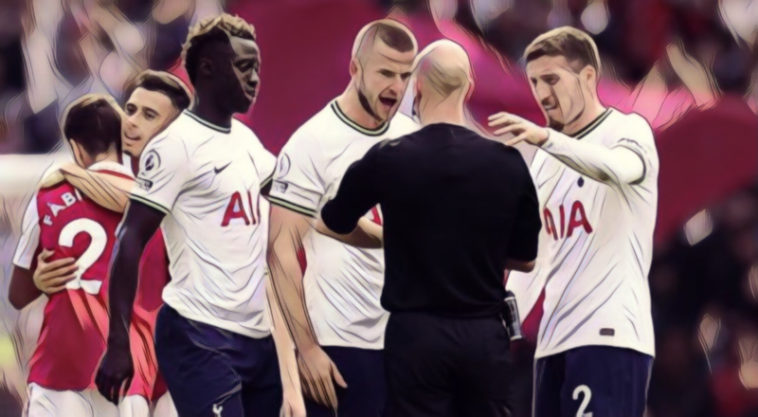 Spurs’ hopes of overtaking Arsenal at the top of the Premier League table ended in major disappointment after they lost 3-1 against their north London rivals today at the Emirates.

The Gunners set the tone early on, pinning their rivals back and within two minutes Brazilian attacker Gabriel Martinelli forced Spurs ‘keeper Hugo Lloris into a fine stop at his near post.

Despite Arsenal hogging possession, Antonio Conte’s Spurs still looked dangerous on their rare forays forwards and on 12 minutes England goalkeeper Aaron Ramsdale got down brilliantly to deny a close-range effort from Richarlison.

Arsenal’s pressure would eventually tell on 19 minutes when the home side opened the scoring in superb fashion. A 22-pass move ended with Ben White laying the ball off to Thomas Partey at the edge of the area, before the Ghana international curled an inch-perfect strike past the despairing dive of Lloris and into the top corner.

Spurs would strike back on 29 minutes, with a swift counter-attack ending with Richarlison being hacked down in the area and referee Anthony Taylor pointing to the spot. Harry Kane stepped up to take the spot-kick and duly fired it straight down the middle for his 100th Premier League away goal.

Conte’s side were in the ascendancy as the game neared the break, although Gabriel Jesus almost put Arsenal ahead on the stroke of half-time with a brilliant mazy run that ended with a left-footed effort that Lloris did well to stop.

Arteta’s side once again started the second period full of intensity and much to the delight of the Emirates crowd this time their efforts would be instantly rewarded. Three minutes in, Hugo Lloris made a meal of trying to deal with a rather tame Bukayo Saka shot and Jesus managed to pounce and bundle the ball home from a couple of yards out.

On the hour mark, things really started to unravel for Spurs when Emerson Royal foolishly went in over the top on countryman Martinelli and the ref had no option but to send the former Barcelona full-back off for an early bath.

Six minutes later and the game was effectively over as a contest when the home side scored a third. Granit Xhaka – now playing in a more advanced role – has been one of the success stories of Arsenal’s season and the Swiss international further endeared himself to his club’s fans by spanking home a low effort into the bottom corner from 18 yards out.

Perhaps with one eye on his sides midweek Champions League clash against Eintracht Frankfurt Conte made five subs and although the Gunners’ support urged their side forward the game eventually fizzled out.

Speaking afterwards Spurs boss Conte lamented his sides sloppiness in the final third, and admitted the game was finished after Emerson’s red card.

“I think the first half was in the balance,” he told BT Sport. ”We had many chances to score. We made a big mistake with the last pass because we had great space. In the second half we conceded a second goal early and we could do much better.

“With the the red card, [went] the game. It was a really difficult game after that. We had to change totally then. It was the referee’s decision and I don’t want to comment.

“We had the opportunity to exploit much better and stay up and I repeat that I think we made big mistakes in the last pass and with easy passes but it happens and straight after the national team it is a bit difficult because players arrive at a different time.

“Now we have to move on but we know our role in this league and we have to try and do our best to stay close to the other teams at the top. I tried to give minutes to players because the game had ended and also to try and save energy.