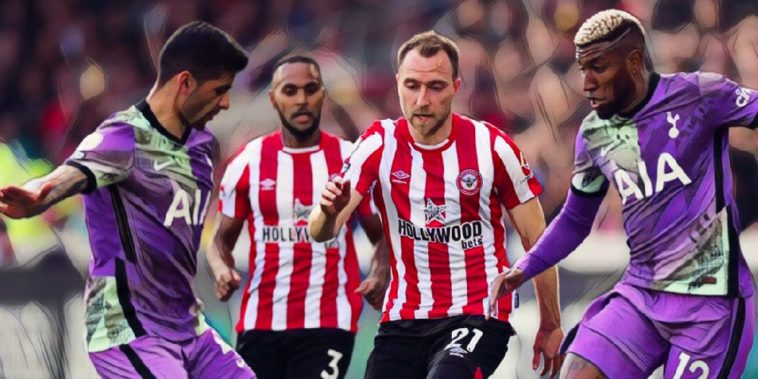 Tottenham’s pursuit of Champions League football took another knock as they were held to a goalless draw at the Brentford Community Stadium.

Spurs came into the game having lost 1-0 to Brighton last time out and had seen Arsenal beat Manchester United earlier in the day to move three points ahead of them in the race for the top four.

However, the North London outfit certainly didn’t come out of the blocks in their bid to close that gap, with Brentford much the better side in the first 45 minutes, Thomas Frank’s side looking by far the sharper and creating a number of highly presentable chances, particularly from the set-piece delivery of former Spurs man, Christian Eriksen.

Brentford continued to fashion the better chances in the opening stages of the second half, the West London side preventing Spurs’ often-dangerous front three of Kane, Son and Kulesevski from having too much influence on proceedings.

Spurs did enjoy significantly more possession as the second-half wore on but lacked any real threat or penetration, and Antonio Conte’s side ended the game without a single shot on target for the second successive fixture, Harry Kane going closest in added time though his acrobatic overhead kick went narrowly wide.

Speaking after the game, Spurs boss Antonio Conte was pleased with his side’s defensive solidity, but felt his team should have done more to ‘create chances’.

“A tough game and for sure, it was very difficult,” he told Sky Sports. “They are physical. They tried to exploit set-pieces in a dangerous way. When there is the possibility, they try to put the ball into the box.

A very good day for Mikel Arteta's side. pic.twitter.com/xac46YR82k

“Defensively we were good but at the same time, I think we can do much better with the ball to create chances to score. The intensity was very high but we knew what type of game we would come to play. It’s a draw and I think when you cannot win, it’s important to take one point and we did this.

“We are trying to do our best. For sure, we want to reach [as high as] possible. We started in a low position in November and I think we made many improvements.

The game saw Christian Eriksen face Spurs for the first time since his departure to Inter Milan in 2020, the Danish international having worked under Conte during his time at the San Siro.

Spurs have been linked with re-signing the 30-year-old upon the expiry of his six-month deal at Brentford, and the Italian was full of praise for the playmaker.

Christian Eriksen created more chances (4) than any other player on the pitch during Brentford 0-0 Spurs.

Unlucky not to get a win against his former side. 🎨 pic.twitter.com/bHjSK6JB2w

“Christian Eriksen is very good with the ball,” he said. “He’s able to use both feet and be dangerous. He’s incredible on set-pieces and we are talking about a really good player. I was very happy to see him in this fantastic form.”

Conte said the result was ‘a good draw’, but admitted his side face a ‘very difficult’ task in order to finish in the top four.

“We have to try to give our best,” he said. “For sure in November you cannot imagine to receive this question. Now we are in the race and we have to stay. We know it is very difficult. The opponent try to pay more attention when they play against you but today is a good draw and I think it was against a Brentford team who played with good intensity and were very dangerous with set-pieces.”

Next up for Spurs is a home game against Leicester, before tricky looking fixtures against title-chasing Liverpool and top-four rivals, Arsenal.

Read Also – Why Manchester City fans will dreadfully miss Fernandinho, the ‘everything’ behind the magic