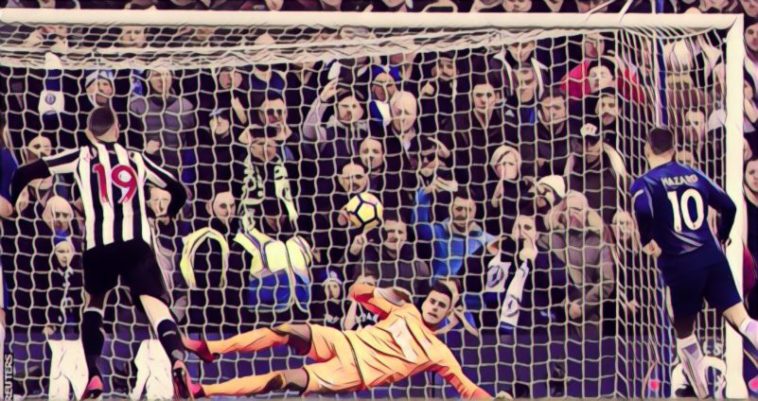 Chelsea ran out comfortable 3-1 winners against Newcastle at Stamford Bridge in the Premier League’s early game today. Dwight Gayle gave Rafa Benitez’s men an early lead, but the home side soon began to dominate through the brilliance of Eden Hazard, and could easily have scored a few more. Let’s see how the players rated …

Had no chance with goal, and was rarely troubled after that.

Strong in defence, and good distribution from Chelsea’s Mr.Reliable.

Another composed display by the talented youngster.

After a shaky start to his Stamford Bridge career, is getting better and better with each passing game.

A solid return to the starting XI. Chelsea look a better team with him in the right-wing back position.

Another passing masterclass by the Spaniard.

A beast. Top class contributions in attack and defence.

Decent, has slotted into Antonio Conte’s side nicely.

Should have done better for Newcastle’s goal, but apart from that a solid shift as usual.

Two goals and a brilliant all-round performance. England will have some job trying to stop the mercurial Belgian in the summer.

Another excellent centre forward display, is making a mockery of those who said he would struggle in the Premier League.

A couple of decent saves, although he was lucky not to concede a penalty for a unorthodox challenge on Morata in first-half.

Did ok at times, but was pushed away from the ball too easily by Morata for the second goal.

A tough day at the office up against Morata and Hazard. Poor clearance straight to Hazard for equaliser.

Always gives 100%, but Chelsea’s front players are just out of his league in terms of ability.

Doesn’t look comfortable at this level.

A couple of decent bursts forward in first-half, but struggled against Chelsea’s class in midfield.

A decent passer of the ball, however like most of his team-mates just couldn’t get near the men in Blue for most of the game.

Gave away a penalty, and his poor defensive header contributed to Chelsea’s second.

Covered a lot of ground without making any real impact.

Not his best day and was hooked on the hour mark.

Followed up his recent goal at Old Trafford without another strike here.