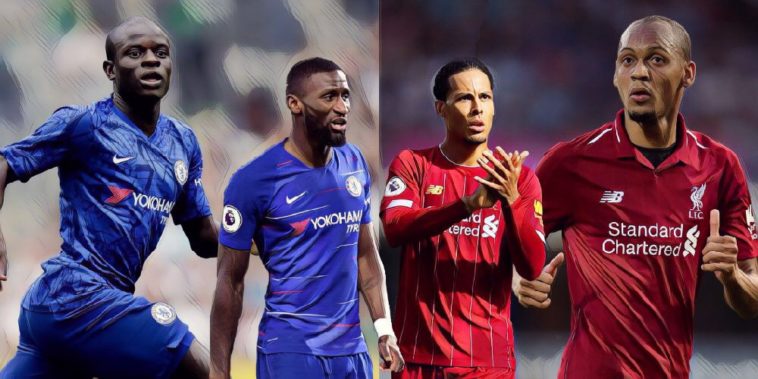 Fierce rivals Chelsea and Liverpool go head-to-head in what promises to be a hugely entertaining encounter at Stamford Bridge on Sunday.

Ahead of the eagerly anticipated clash we’ve decided to pick a combined XI from the two sides, and here it is…

Liverpool’s Brazilian ‘keeper Alisson would walk into our team, but the Brazilian remains unavailable after the calf injury he picked up on the opening day against Norwich. Chelsea number one Kepa is very much a modern goalkeeper in regards to his ability to snuff out opposition attacks by flying off his line and his superb distribution off either foot.

At just 24 the Spain international has bags of potential and could quite possibly play at the top level for another 10-15 years, and that’s exactly why Chelsea forked out £71 million and made him the most expensive goalkeeper ever in the summer of 2018. However, our one criticism of the former Athletic Bilbao man is that he rarely seems to make the kind of match defining saves that great goalkeepers are often remembered for.

Absolute dog shit defensively, but my god what a wonderfully gifted footballer the young Scouser is. I’m not usually one for hyperbole, however, it really is hard to think of an English player as technically gifted in regards to passing and crossing as the Liverpool academy graduate.

The 20-year-old’s 12 assists in just 29 Premier League appearances from right-back last season is quite frankly ridiculous, and he’s started this campaign in a similar vein, already laying on two assists for his grateful teammates.

Even the most optimistic of Liverpool fan couldn’t have predicted just how big an impact the current European Footballer of the year would have on a Reds backline that had been a target of derision for years.

Dutch international Van Dijk has been imperious since moving to Anfield in a £75 million deal from Southampton in 2017, turning Liverpool’s defence, which was often seen as their biggest weakness into arguably their biggest strength. The fact the 27-year-old defender is favourite to lift the Ballon d’Or tells you all you need to know.

Germany international Rudiger has established himself as Chelsea’s most reliable central defender since moving to Stamford Bridge from Roma in 2017. Blues boss Frank Lampard will be delighted to have the 27-year-old available for selection on Sunday, after he missed the first few games of the season through injury.

Many believe Rudiger’s pace, positional sense, and composure in possession will go some way to alleviating the defensive instability Chelsea have shown so far this season.

Robertson has been nothing short of a revelation since moving to Liverpool in a cut-price deal from relegated Hull City a few years ago, establishing himself as one of Europe’s top full-backs. Adored by Reds fans for his relentless energy, Robertson, much like Alexander-Arnold is a major threat going forward, although unlike his teammate is also a solid defender.

Whisper it quietly though the Scotland captain has looked a little off colour at times this season and that could be a worry for Liverpool, with no obvious cover in Jurgen Klopp’s squad.

An absolute tour de force when at his best, Leicester City signing the £5 million from Caen in the summer of 2015, will surely go down as one of the greatest signings in Premier League history. Kante’s almost superhuman displays at the heart of the Foxes midfield would inspire Leicester to a sensational title triumph, before he moved to Stamford Bridge and repeated the trick the following year.

The 28-year-old’s form suffered a dip last season after he was moved from his preferred role screening the back four to a more advanced position by Maurizio Sarri, and getting the best out of him may well be one of the factors that defines the success of Frank Lampard’s reign as Blues boss.

Lampard has confirmed that he has a chance of returning from injury for Sunday’s clash, and his presence will hugely increase Chelsea’s chances of beating the league leaders.

After a slow start to life in English football, former Monaco man Fabinho has gradually established himself as a vital cog in Liverpool’s midfield.

His positional intelligence, toughness in the tackle, and tidy distribution, make the Brazilian the ideal holding midfielder.

Many questioned the 20-year-old’s ability to make an impact in the Premier League, but the England international has made a mockery of those who doubted him by scoring three top-flight goals already this season, each one of his strikes sublime in it’s own right.

The biggest compliment we can give the Chelsea academy graduate is that despite his inexperience at the elite level, whenever he gets the ball in the final third you perk up in your seat.

He suffered a nasty-looking ankle injury against Valencia in midweek, although Lampard is surprisingly giving him a chance of recovering and featuring against the Reds.

Mane moved to Liverpool in 2016 and the Senegalese attacker has taken his game up a level in each season since. Always blessed with blistering pace and superb movement, his finishing has improved immeasurably and a joint league-high 22 goals last season is a testament to that.

Now genuinely one of the elite attackers in European football and a player with a knack of scoring big goals in big games.

Liverpool fans have been saying that Firmino is the man that makes Liverpool’s fearsome front three tick for quite a while now, and it seems the rest of the world is finally starting to think the same way.

He doesn’t score as prolifically as his fellow attackers, but his pressing and ability to drop deep, link the play, and open up pockets of space are integral to Liverpool’s success.

Suprised absolutely everyone by morphing into a world-class goalscoring machine in recent seasons. After struggling for game time at Chelsea, Salah lit up English football in 2017/18 after joining Liverpool after a spell in Serie A. Despite Liverpool finishing fourth that season, he scored an all-time record 32 Premier League goals, a feat made all the more sensational by the fact he doesn’t even play as a central striker.

The Egyptian King hit another 22 last season to show he is no one-season wonder, and Chelsea fans will be praying he is nowhere near his devastating best when he returns to his former home tomorrow.