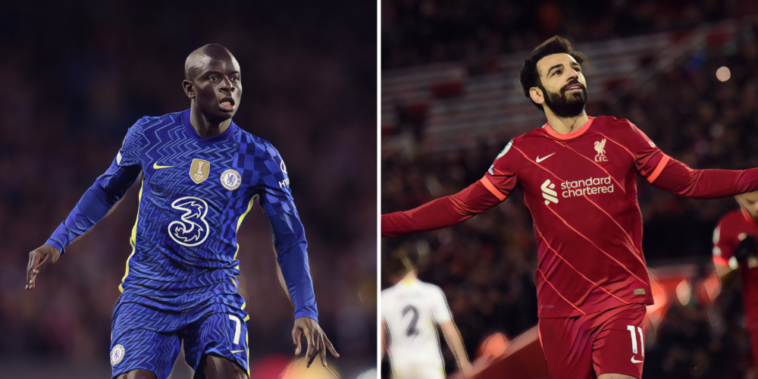 Chelsea face Liverpool in the Carabao Cup final this weekend, the two rivals set to go head-to-head for the first major trophy of the English football season.

It’s the third time the teams have met in a major final since the turn of the millennium, with Chelsea and Liverpool having developed a very modern rivalry across the past two decades.

Sunday’s showdown should be a tight contest between the sides sat second and third in the Premier League at present and ahead of the clash we’ve decided to compile our best combined XI from the two squads.

Among the most difficult selections on the team sheet, we’ve sided with Edouard Mendy following an incredible 18 months for the goalkeeper.

Mendy was impregnable as Chelsea won the Champions League last season and now boasts a record of 14 clean sheets from 18 games in Europe’s elite competition, whilst he was crucial to Senegal’s success as the nation won a maiden Africa Cup of Nations title earlier this month.

Alisson’s brilliance has bailed out Liverpool on occasion this season, but it is difficult to overlook the achievements of Mendy in recent months.

Trent Alexander-Arnold is enjoying an excellent season with Liverpool, the right-back setting the standard for creativity from full-back.

Alexander-Arnold leads the Premier League for assists (10) alongside Mohamed Salah, whilst he leads the division for expected assists per 90 and crosses, and ranks second for key passes.

🅰️ Mohamed Salah, Trent Alexander-Arnold (both 10) and Andy Robertson (9) have registered the most assists in the Premier League this season. I wonder what they have in common… pic.twitter.com/KAL0U0IHgz

The England international has reached double figures for assists in three of the past four campaigns and is now fourth in the all-time rankings for assists among defenders, a remarkable achievement given he doesn’t turn 24 until October.

Antonio Rudiger’s contract situation has dominated the news for Chelsea this season, the west Londoners in real danger of losing a centre-back who has been an irreplaceable figure for Thomas Tuchel.

The Germany international has enjoyed the best period of his career under his compatriot, becoming a huge fans’ favourite for his aggressive and domineering manner of defending at Stamford Bridge.

Rudiger’s recovery pace and front-footed defending are vital to Chelsea’s system, with the 28-year-old and Thiago Silva set to provide the bedrock for the club’s Carabao Cup challenge.

Van Dijk’s return this season has been a huge boost to Liverpool’s hopes of silverware success, with the Dutch international having been a key presence in a team still competing on four fronts.

Questions were asked as to whether Van Dijk would return the same player following his long injury lay-off, but he remains the finest centre-back in the Premier League and a crucial component of Jurgen Klopp’s title-chasing side.

Dominant in the air, effortlessly cool and boasting a fine passing range from deep, Van Dijk is a nightmare opponent for even Europe’s best centre-forwards.

Andy Robertson is rapidly closing in on Leighton Baines’ record for assists by a Premier League defender, with the Scotland captain and Trent Alexander-Arnold irreplaceable to Liverpool’s brand of football.

The duo provide much of the width and creativity in Jurgen Klopp’s side, allowing the front three to move narrower and into more dangerous goalscoring positions.

Robertson remains the leading left-back in the Premier League, an indefatigable competitor with a wonderful quality in possession.

Jordan Henderson lavished praise on Fabinho when speaking to BT Sport earlier this month, hailing the Brazilian’s importance to the Liverpool side.

“He’s the best in the world for me in that position, he’s incredible and he’s a huge player for the way we play,” the Liverpool captain gushed.

Fabinho has long served a vital function to the Liverpool side, his telescopic legs halting opposition attacks as he racks up interceptions and tackles in the engine room.

The 28-year-old has even added goals to his game in recent weeks, scoring five goals in his past nine appearances across all competitions.

N’Golo Kante provided a reminder of his importance to Chelsea with a dominant performance against Lille in midweek, the midfielder’s box-to-box influence capable of winning games for the west Londoners.

Having been viewed as a holding midfielder following his early emergence, Kante has since evolved into a dynamic presence who bursts forward and breaks lines at Stamford Bridge.

Kante’s drive – coupled with the defensive tenacity to regain possession – will be crucial to Chelsea’s hopes of stifling Liverpool’s midfield at Wembley.

Mateo Kovacic earns the final berth in our midfield three, with the Croatian a footballer with an abundance of qualities.

Kovacic is an excellent passer and boasts 90.81% pass accuracy in the Premier League this season, though he combines that proficiency in possession with an admirable work-rate and ability to dribble through the tightest gaps in opposition midfields.

The start of Chelsea's fightback…💪

Kovacic got their first goal of the match with an absolute stunner! 🚀 pic.twitter.com/EvhnFEnTHF

He also averages a huge 6.4 ground duels won per 90 minutes in the Premier League this season and edges out Jordan Henderson and Thiago Alcantara for a place in this side.

Thiago’s contribution to the Liverpool cause has been understated given his lack of consistency in terms of fitness, but the Reds are often a much better side with his presence in the midfield and he could be a key figure at Wembley.

Mohamed Salah leads the Premier League for goals, assists, big chances created, and shots this season with the Egyptian international enjoying an extraordinary season for Liverpool.

Salah’s record-breaking 2017/18 was seen as his highest level but there is an argument the forward is eclipsing those performances this term, his 10 assists already better than the nine he managed in that first campaign at Anfield.

Into double figures for goals and assists in the @premierleague this season 👏 pic.twitter.com/fcczHBBDRP

Salah also has 19 goals and is seven clear in the race for a third career Golden Boot, whilst its now 37 goals and assists in 31 appearances across all competitions, a remarkable return for a footballer among the world’s best at present.

The arrival of Luis Diaz and continued improvement of Diogo Jota has added competition for places at Liverpool, but Sadio Mane remains among the Reds most reliable performers.

Mane is the third-highest scorer in the Premier League this season with 11 league goals and enjoys a fine goalscoring record against Chelsea, with the forward having only ever scored more goals against Crystal Palace (13) than the eight he has managed against the west Londoners.

Having returned from the Africa Cup of Nations as the Player of the Tournament, he will want to get one over Senegal teammate Edouard Mendy and add further silverware to his collection this weekend.

Diogo Jota is a doubt heading into the final but the the expectation is that the Portugal international will take his place in the Liverpool squad, as a substitute at the very least.

Jota’s presence will be a major boost with the forward having reached new levels this season, scoring 17 goals in all competitions including a brace in the semi-final second leg win over Arsenal.

There were questions asked when Liverpool secured the signing of Jota from Wolves in 2020, but he has evolved into the perfect Jurgen Klopp forward with a tireless tenacity defensively and outstanding quality around goal.