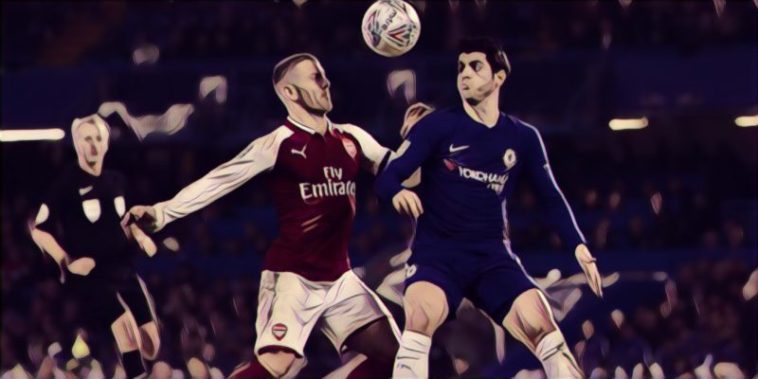 Chelsea and Arsenal played out a pretty drab 0-0 draw at Stamford Bridge tonight in the Caraboa Cup semi-final first leg. Let’s see how the players rated …

Apart from one decent save in the first-half was a relative spectator.

Solid as a rock as always.

Continues to look comfortable at this level.

Rarely tested, but did everything he was asked to do with ease.

Got forward really well particularly in the first-half.

Went close with a couple of headers, and one shot from distance, has grown into one of the best left-backs in England.

Still looks to be finding his feet in this Chelsea team, a few decent passes, but also a few poor ones.

Covered a huge amount of ground as usual.

Couldn’t quite manage to impact the game as you expect the classy Spaniard to do.

Started sharply, although he faded as the game went on.

Worked hard, but seems to be suffering from a loss of confidence in front of goal.

Forced Ospina into a decent save from distance.

Looked unconvincing at times, however he still kept a clean sheet at Stamford Bridge so he gets a eight.

Surprisingly solid for a change.

Struggled against Morata at times, but all in all a decent display.

Much like Chambers actually not that bad for once.

Had a decent battle with Alonso. Defended well but didn’t get forward as much as usual.

Struggled defensively in first-half but recovered well in second period.

Passed well at times, but lucky not to be sent off after two fouls in quick succession after he was on yellow.

Best player on the pitch until he had to go off injured.

Worked hard, although was guilty of perhaps the worst ever shot on target in the history of football in second-half.

Got through a mountain of work for his team, but carried very little goal threat.

Skyed one decent chance over the bar in the first-half and made very little impact thereafter.

Buzzed around trying to create something for his side without any success.

Did a decent job defensively.