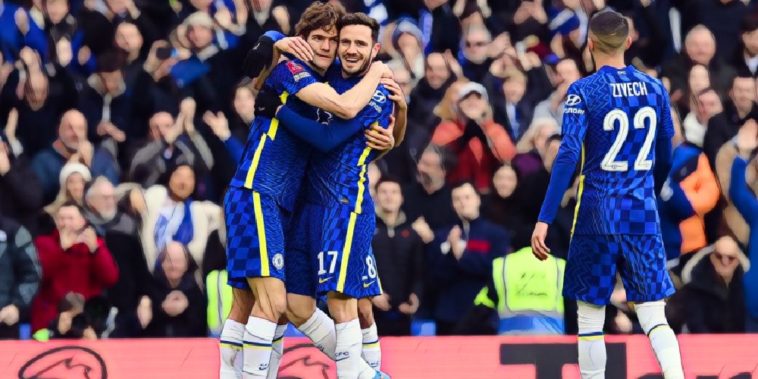 Chelsea survived an FA Cup scare as they came from behind to beat Plymouth Argyle 2-1, with Kepa Arrizabalaga saving an extra time penalty.

Chelsea sent out a strong starting XI against their League One visitors, the likes of Romelu Lukaku, Jorginho, Mason Mount and Antonio Rudiger among the starters for the hosts.

The Blues started firmly on the front foot, but were stunned in the eighth minute after conceding a free kick in a dangerous position down the Plymouth left. Jordan Houghton swung in a peach of a ball toward Macauley Gillesphey, the defender easing Romelu Lukaku underneath the ball before glancing a header beyond Kepa Arrizabalaga.

Chelsea would hit the woodwork three times in the opening 35 minutes as they looked to get back into the game, and their pressure would finally pay dividends and they hauled themselves level with five minutes to play of the first half. The Blues worked it down the right before Mason Mount picked out the near post run of Cesar Azpilicueta who produced an improvised flicked finish to level the scores from six yards.

The second half started much in a similar vein as the first, with the Premier League side dominating possession but coming up against a Plymouth side who defended stoically, while goalkeeper Michael Cooper put in a commanding display inbetween the sticks for the Pilgrims.

For all of Chelsea’s profligacy in front of goal, they would finally take the lead on the stroke of half time, the Blues finally stringing together a decent passage of play as Timo Werner found the run of Kai Havertz down the left channel, the German playing a first-time cut-back to find Marcos Alonso who slotted home.

The Devonians refused to give up and created a couple of chances in the second-half of extra time, and would be handed the chance to equalise and take the game to penalties after Malang Sarr clumsily brought down Ryan Hardie. However, having been the hero in the Super Cup penalty shootout, Kepa kept out Hardie’s tame spot kick as the European champions booked their place in the fifth round.

Thomas Tuchel was forced to miss the game after testing positive for Covid-19, and speaking afterwards, assistant Arno Michels revealed that he was in constant contact with the Chelsea manager as he assessed the side’s performance.

“We had so many shots and so many chances,” he told Match of the Day.

“There were so many opportunities in the box today, but they defended very well, very deep but very disciplined. It was not easy to convert all these opportunities.

“We stayed in touch with Thomas [Tuchel]. Right now we have to wait for the next day to see what’s going on.”

The Blues are due to immediately jet out to Abu Dhabi to take part in the Club World Cup, with the club suffering a number of injury issues ahead of the trip.