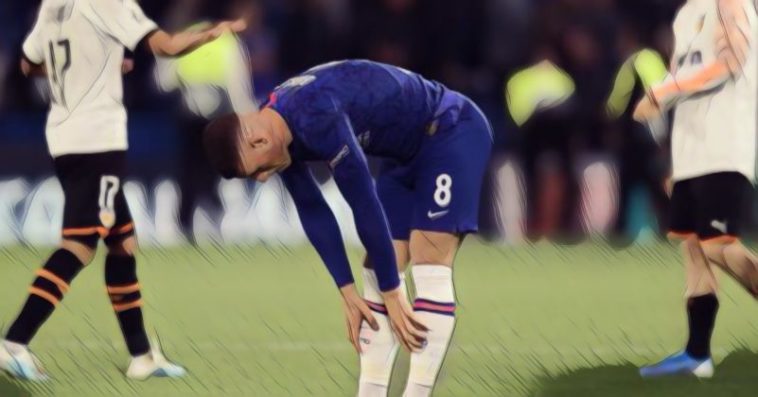 Cesar Azpilicueta has said that Chelsea’s 1-0 loss to Valencia was ‘hard to take’ as Frank Lampard tasted defeat in his first Champions League game as Blues boss on Tuesday night.

Chelsea were dealt a blow early on when in-form youngster Mason Mount was forced off injured and the first period was a tight and cagey affair.

Spain international Rodrigo would put the La Liga outfit ahead in the 72nd minute after some questionable marking from the home side.

However, Chelsea were then handed a lifeline when they were awarded a penalty after Fikayo Tomori’s header was handled in the area. After a dispute between midfielders Ross Barkley and Willian over who would take the spot-kick, the England international stepped up and hit his effort over the bar.

Speaking after the game Blues skipper Cesar Azpilicueta admitted the defeat was tough to take and urged his young teammates to learn from the defeat.

“It is hard to take because through the game we had better chances and controlled the game,” Azpilicueta told BT Sport.

”It is the Champions League and it can be decided in small details. They score a goal and we could not convert our chances.

“Ross (Barkley) is one of the best penalty takers in the team and one who takes them. He had the confidence and he was unlucky hitting the bar. They [the other players around him] were encouraging him to have the confidence to score. There was high expectation. They were trying to get him into the best condition. Hopefully next time it goes in.

“We are trying to build something special. We have a young squad. But we need to get results straight away. It is a lesson we have to learn as a team. We still have five games to qualify.”