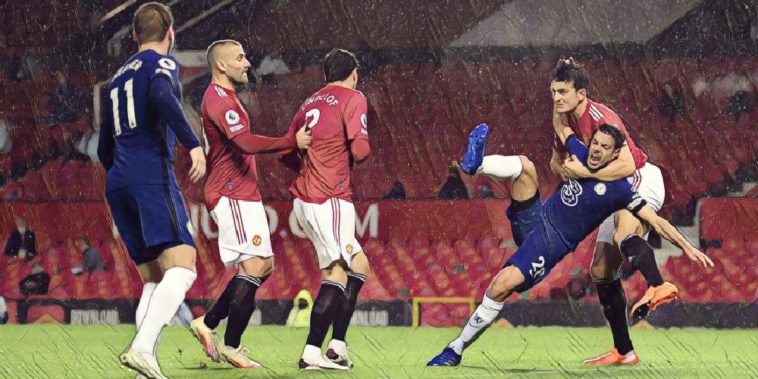 Chelsea registered a second successive 0-0 draw after a less than exciting encounter against Manchester United at Old Trafford.

It was a game that was somewhat played out like a game of chess, both sides seemingly unprepared to take too many risks following their early-season inconsistencies.

Chelsea dominated possession but didn’t really threaten Manchester United’s backline, and it would be man-of-the-moment Marcus Rashford who was presented with the first real big chance of the game on 35 minutes. The England international was slipped through by Juan Mata, though his effort from the edge of the box was fired too close to ‘keeper Eduoard Mendy who saved with his legs.

Having been brought in to replace the error-prone Kepa Arrizabalaga, Mendy produced another decent save six minutes later to keep out a first time effort from former Chelsea favourite, Mata.

Deadline day signing Edinson Cavani made his first appearance in a Red Devils shirt, replacing Dan James as a second-half substitute, and the 33-year-old almost scored with his first touch in English football as he got across his man at the near post, only to see his effort ripple the side netting.

Chelsea, marshalled by veteran centre-back Thiago Silva, defended stoically throughout, though Rashford thought he had won it for Manchester United as the game ticked into added time, but he was again thwarted by Mendy between the sticks, the summer signing from Rennes diving acrobatically to his left to keep out the 22-year-old’s curling effort.

“I have the feeling we could have done more,” he told Sky Sports. “We found spaces but we didn’t create the last pass or pick the right pass or make the right decisions. We defended solid and they have at the end one save by Edouard [Mendy] and in the first half one mistake by us, but we could do more.

“For moments we had spells. In the first half we controlled better but in the second half sometimes we rushed it and didn’t move the ball good enough. We lost possession too easily which meant we lost some control but we showed solidity and it was a great effort from everybody. Obviously, we want more.”

Chelsea did have a shout for a first-half penalty when Azpilicueta was held in the box by United skipper Harry Maguire, though neither Martin Atkinson nor the VAR decided it was worthy of a spot-kick, and Azpilicueta felt that the incident should have been reviewed on the monitor at the very least.

There was little to shout about at Old Trafford but should VAR have intervened for a Chelsea penalty?

“On the pitch I felt yes [it should have been a penalty] and I felt arms around my neck and shoulders,” he said. “The referee can make the decision, the VAR is there [to help]. In any situation, the referee takes the main decisions and the monitor is there for him to help. It was 50-50 so why not take 20 seconds to review it? I think VAR can improve a lot.

“It happens, it is football, I don’t say every time there is contact there should be a penalty. In England, there is strong physical contact. In football and in the Premier League always we should seek improvement – it is not a criticism, we can all help together to make a better league.

“We have a long season to go and hopefully we can keep improving. We have the quality to do it.”

Chelsea now face two more away games, facing FC Krasnodar in the Champions League before another trip to the North West when they take on Burnley next weekend.