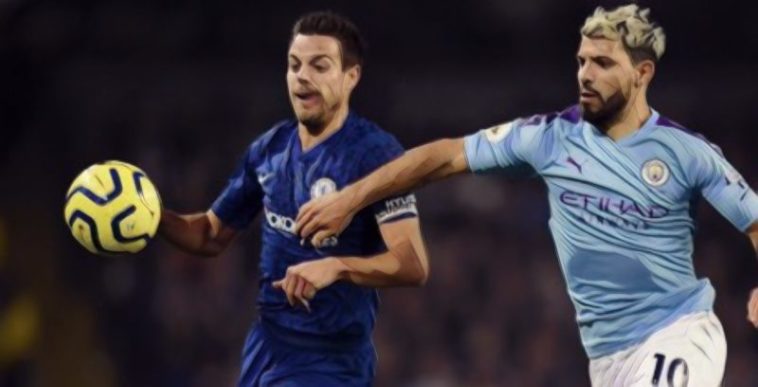 Fourth meets second in a huge meeting between Chelsea and Manchester City in mid-week, each side seeking another victory after making winning restarts to the Premier League season.

Here is all you need to know about Thursday’s clash at Stamford Bridge:

Frank Lampard’s side extended their advantage over the chasing pack with a come from behind victory over struggling Aston Villa last weekend, the west London side now five points clear of Manchester United and Wolves in the race to secure Champions League qualification.

It’s now four league games unbeaten for the Blues either side of the season’s suspension, and Lampard will be keen to continue his side’s momentum ahead of the visit of an in-form Manchester City side.

Chelsea‘s options have been boosted by the return from injury of several leading stars including N’Golo Kante, Ruben Loftus-Cheek and Christian Pulisic, the latter having made a scoring appearance off the substitutes bench during the win at Villa Park.

Olivier Giroud will hope to retain his place in attack despite the return of leading scorer Tammy Abraham, the France international having scored three times in his past four league appearances.

The Premier League champions have made a flawless return to action over the past week, scoring eight times without reply during comprehensive victories over Arsenal and Brighton at the Etihad.

Pep Guardiola’s side now face their most difficult assignment to date with a trip to face fourth-placed Chelsea in the capital, though will take encouragement from a fine recent record against Thursday’s opposition.

Man City have won six of the last seven meetings between the two sides in all competitions, including the last three in succession. Guardiola’s side will have to do without the injured Sergio Aguero, however, the forward having limped off during the win over Burnley on Monday night and expected to face a lengthy period on the sidelines.

Phil Foden will hope to maintain his place in the starting XI, the 20-year-old having scored three goals in two fixtures since the Premier League’s restart last week.

The scans I did this morning have confirmed that I have damaged my left knee. It’s a pity but I’m in good spirits and so focused to come back as soon as possible. Thank you very much for all your messages!

Manchester City avoided back-to-back league defeats after coming from behind to beat Chelsea at the Etihad in November, the visitors having taken the lead in an entertaining contest through N’Golo Kante.

The France international raced onto Mateo Kovacic’s lofted pass to put the Blues ahead, though their lead lasted just eight minutes as Kevin De Bruyne levelled against his former side, the midfielder’s deflected effort wrong-footing Kepa Arrizabalaga.

Riyad Mahrez scored the game’s winning goal before the half-time break, the winger cutting in from the right-hand side in signature style before scoring City’s second with a fine finish.

Pep Guardiola’s side held out to secure all three points, moving above Chelsea and into third.

UK and Irish readers can watch the game on BT Sport 1, whilst US supporters can view the game on NBCSN.