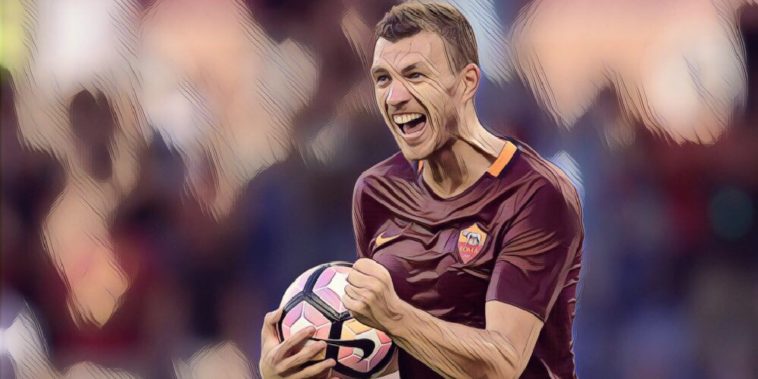 Chelsea have made a €50m bid for Roma duo Edin Dzeko and Emerson Palmieri according to reports in Italy.

Reports surfaced on Friday of Chelsea’s interest in the Roma striker as they look for more fire power to fill in for the misfiring Alvaro Morata.

Morata hasn’t scored in his last six games, and was sent sent off during the Blues’ FA Cup third round replay win over Norwich. Michy Batshuayi scored during that particular game after being handed a rare start, but Antonio Conte is wanting to further strengthen his attacking options.

Andy Carroll was thought to be the first choice, but his potential move to Stamford Bridge has been scuppered by yet another injury.

This has seen the current Premier League Champions look elsewhere, with their attentions apparently having been drawn to former Man City striker Edin Dzeko.

According to Calciomercato, Chelsea have lodged a €50m bid for both Dzeko, and his Roma teammate Emerson Palmieri. It is also claimed that the Blues are ready to sweeten the deal by including Michy Batshuayi.

It is thought that Roma are willing to sell, but want Chelsea to up their offer by a further €10m in the form of add ons, although they are cautious that it may be the last chance they get to command such a high fee, and make such a significant profit on the 32-year-old Bosnian striker.

Dzeko scored 72 goals in 189 appearances for Manchester City during his four-and-a-half year spell at the club.

Roma are also prepared to let Palmieri leave after he has been dislodged as first choice left back Aleksandar Kolarov who joined the club in the summer, with claims that his agent has already travelled to London to discuss the move.