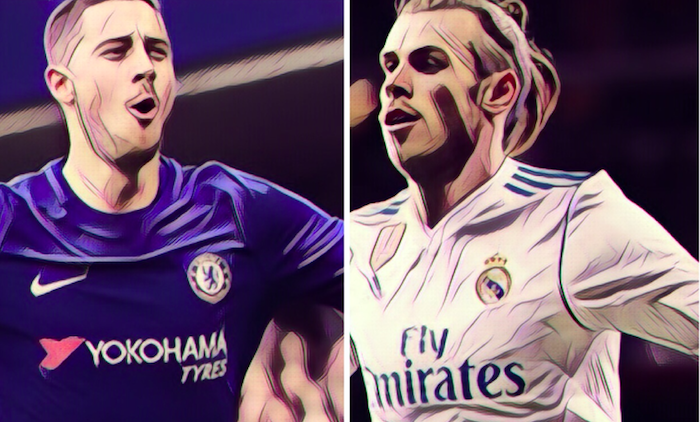 Chelsea are being linked with a sensational swap deal that would see Eden Hazard join Real Madrid and Gareth Bale move to Stamford Bridge.

Bale came off the bench to score a match winning brace in last weekend’s Champions League final against Liverpool, with his second goal a acrobatic bicycle kick widely regarded as the greatest goal ever scored in a major European final. His coach Zinedine Zidane also did little to quash the speculation surrounding his talented attacker when he admitted he situation in the Spanish capital was ‘’complicated.”

Chelsea star Eden Hazard has been stalling on signing an extension to his contract at Stamford Bridge that expires at the end of next season for several months now. The Belgium international has of course been heavily linked with a move to Real even before Bales comments, and the 27-year-old has often spoken of his admiration for Zidane who was his idol as a child.

In fact the Daily Express reported a few days ago that although the Blues do not want Hazard to leave they would be prepared to negotiate if Bale was included as part of the deal.

A swap may actually suit Chelsea better as the Stamford Bridge club no longer have the financial clout in the transfer market they once had, and would struggle to pay the huge transfer and wage package that any deal for Bale would entail.

Strap yourselves in everybody because the names Bale and Hazard are going to be dominating the transfer headlines all summer.