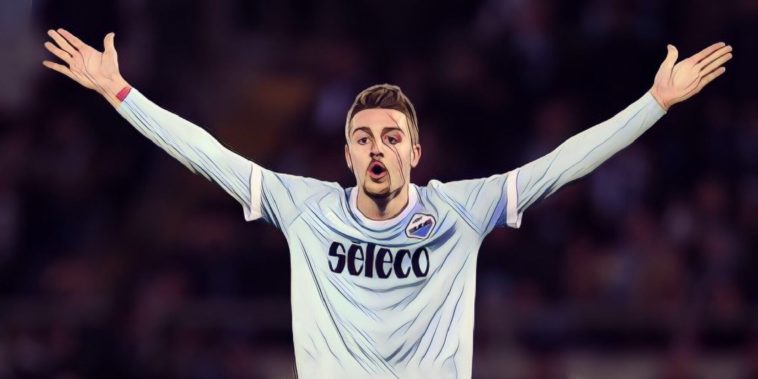 Chelsea are set to join the race to sign Lazio star Sergej Milinkovic-Savic according to reports this morning.

The Serbian international midfielder is one of the most highly rated midfielders in Serie A and has attracted the attentions of Manchester United, Real Madrid and Juventus in recent months.

Juventus’ £100 million signing of Cristiano Ronaldo will make a move by the Italians somewhat more difficult, considering that Lazio have also slapped a £100m price tag on the central midfielder, while Marouane Fellaini’s decision to sign a contract extension has lessened United’s need for a new central midfielder for now.

Now, according the the Independent, Chelsea are hoping to steal a march and beat everyone to the signing of the 23-year-old, who scored 12 goals in 35 league appearances for Lazio last season.

New Chelsea boss Maurizio Sarri will have seen the Serbian’s talent first hand over the last few seasons during his time as Napoli boss, and must have be convinced he can fit into his dynamic and attacking system that saw the Neapolitans finish second in Serie A last season, despite amassing an impressive 91 points.

The Blues have already signed Jorginho from Napoli this summer, but with just two weeks until the transfer window closes, they could be one of the busiest teams in the Premier League, with Eden Hazard, Thibaut Courtois and Willian all having been linked with summer exits.

They have been linked with a move for Bayer Leverkusen winger Leon Bailey and Bayern Munich’s Thiago in recent days.