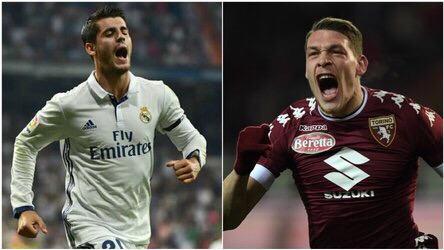 Chelsea have re-started their search for a new striker after missing out on Romelu Lukaku to Manchester United.

Lukaku was Antonio Conte’s top target, and his imminent move from Goodison Park to Old Trafford has reportedly left the Italian furious at the failure to secure a deal.

However after telling Diego Costa via a text message that he is free to leave the club, Chelsea have now started looking at other options to lead the line next season.

The Daily Mirror claim that one of the targets Chelsea will pursue is Torino striker aandrea Belotti. Belotti has been linked to both Manchester United, Arsenal and AC Milan over the past 12 months after scoring 40 goals in 74 appearances for the Italian club over the past two seasons.

The 23-year-old has a buyout clause in his contract, meaning that an offer of £90m (€100m) would be enough to sign the Italy international.

However Gianluca Di Marzio claims that Chelsea have have already opened talks with Real Madrid over signing of Alvaro Morata.

The Spaniard was heavily linked with a move to Manchester United, with a deal thought to have been tantalisingly close, before the Red Devil’s swooped in under the noses of Chelsea to sign Romelu Lukaku. Morata could still claim a big money move to the Premier League by moving to Chelsea. He is in search of regular first team football ahead of next summer’s World Cup, where he wants to ensure he is Spain’s first choice striker.

Real Madrid were asking for a fee of between €80m and €90m from Manchester United, and it is expected they would do the same from Chelsea.

Who should Chelsea sign? Belotti? Morata? Someone else? Could Costa eventually stay? Chelsea fans, leave us your thoughts.